Electrical fuses are safety devices that cut off the electrical connection in a circuit during an overcurrent event, usually caused by an overload or short circuit.

They ensure that the electrical wiring only carries a safe amount of current to prevent overheating which can cause fires.

They come in different shapes and fuse sizes depending on the application, with each rated for a specific operating voltage, maximum current, and the amount of time it takes to blow (speed). What are the common fuses that needed testing?

Before we learn how to test a fuse with a multimeter, let’s find out the different types of fuses.

A glass fuse is the most common type of fuse, it has a glass body with two metal end-caps acting as the contacts.

A thin metal wire inside the fuse connects the two caps and melts if it reaches the maximum rated current, protecting the circuit and electronics in the case of excessive current or a surge. 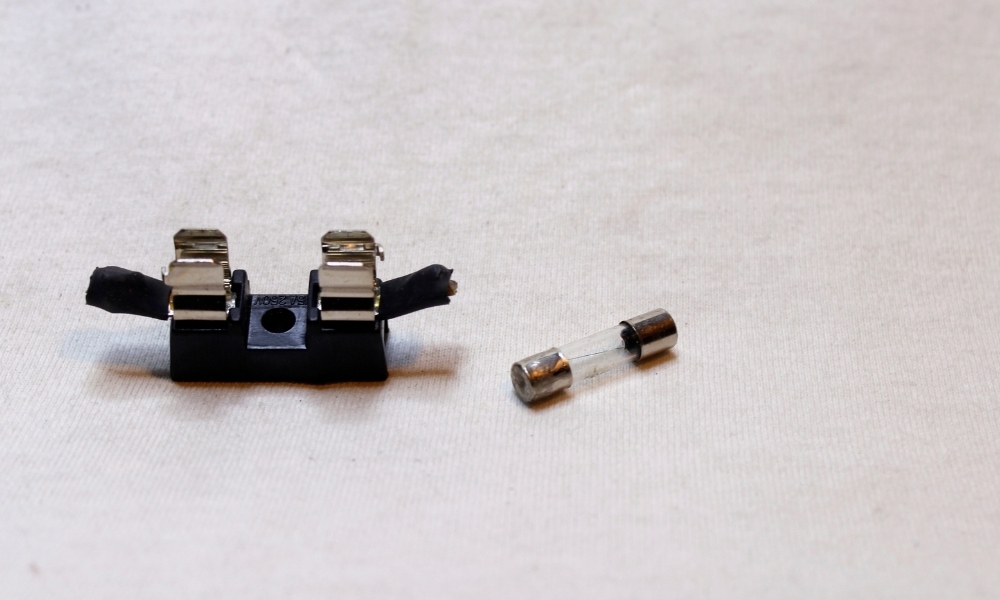 Not to be confused with a circuit breaker, (Below) these are more common in older houses with a dedicated fuse box.

The glass body is replaced with ceramic, allowing it to survive higher temperatures and therefore have higher current ratings. 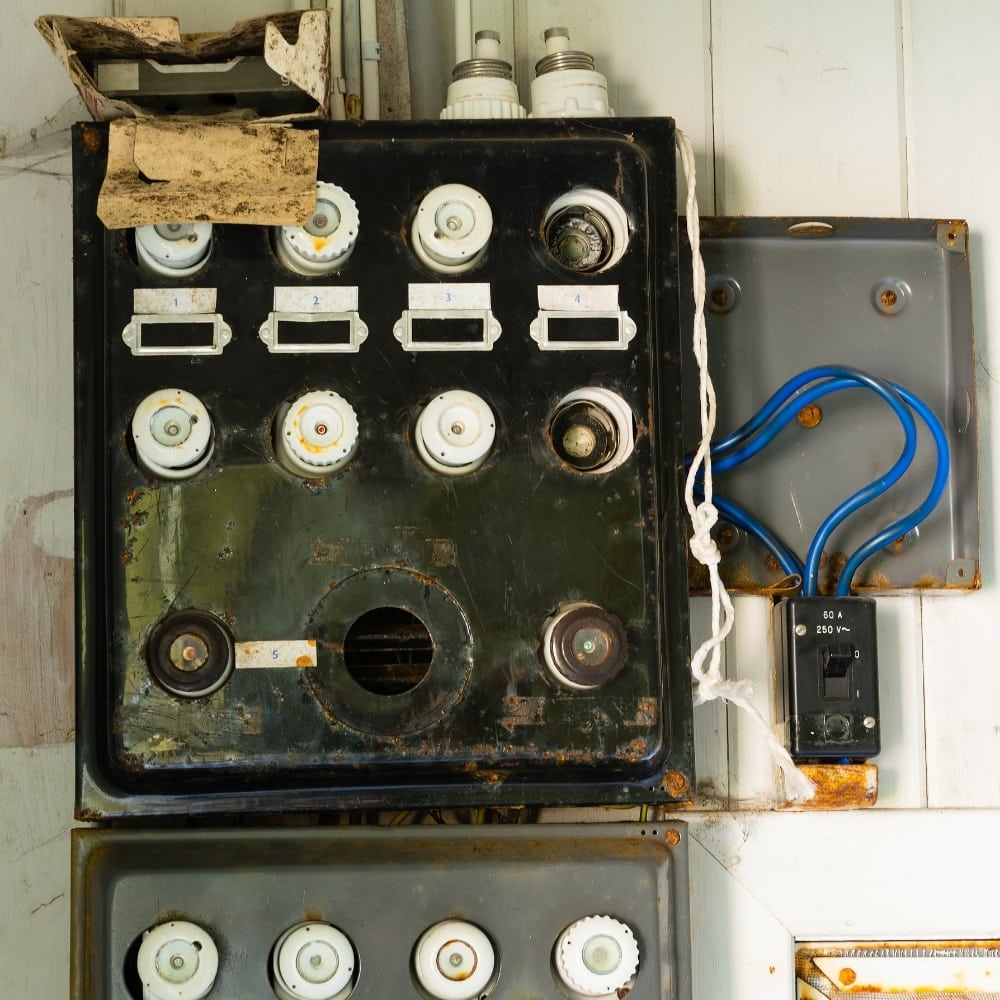 Unlike the first two, which are both a type of cartridge fuse, a car or automotive fuse is smaller and thinner, with plastic housing and two metal blades acting as contacts.

They’re mostly used in vehicles and have a much lower voltage range (up to 32 volts).

A special kind of fuse, a thermal fuse reacts to heat instead of current.

They come in handy with heating appliances to ensure that they don’t overheat and cause fires.

Most homes will have a circuit breaker that acts as a fuse except that it can manually be reset without a replacement.

If the circuit breaker is cutting off even with a low current draw, maybe there is something wrong with your circuit and you need an electrician to have a look, or maybe the breaker is getting old and too sensitive.

Test with a different breaker in its place rated for the same amps and volts.

6. A circuit breaker with an RCD

Modern homes can have RCDS built into the circuit breaker.

An RCD will be displayed on the breaker and additionally trip if it detects possible shorts, rather than just surges in current. Making the wiring in your home much safer by reducing the chance of electrocution.

What are the risks of a blown-up fuse?

Since fuses are basically ‘sacrificial’ devices, there’s nothing inherently dangerous about them after they’ve blown.

However, if the circuit that the fuse is protecting is operation and safety-critical such as the headlights of a car, it is best to find the blown fuse and replace it immediately so that the circuit and its appliances are operational again.

The thing to worry about is whatever might have caused the fuse to blow in the first place.

Inspect the wiring that the blown fuse connects to for shorts or loose connections and fix them before replacing the fuse. All you need is a ready digital multimeter in your tool backpack or sitting in your tool belt.

Possibly the fuse that was installed was too small for the expected current, additionally, some fuses can wear down over time and handleless current before blowing. For example, solar fuses might need replacing every few years. What is a multi-meter and what settings should you know to test a fuse?

A multimeter is a general-purpose tool used in electrical work.

It can measure the properties of an electrical circuit and its components such as electrical connection, voltage, current, and resistance.

Did we mention that you can also use it to measure the capacity of a battery too?

Depending on the model and type you use, using a multimeter may seem daunting at first with all the settings and dials, but trust that it’s actually quite easy to use.

Up top, we have a screen that shows the value of whatever you are measuring. Below that we have some buttons is the main dial where you can choose what you will be measuring for.

At the very bottom are some input terminals where you plug in two probes that will be used to make contact with the electrical circuit or device you are checking.

For multimeter fuse testing, there are only two things that you should be measuring for: This simply refers to the presence of a good connection between two points in a circuit [1]. In this case, the two contacts of a fuse. This can be measured by setting the dial of the multimeter to a symbol that looks like a diode.

If you don’t know how to test a fuse for continuity with a multimeter, you’ll have to find the diode-like symbol on the multimeter.

If you’re unfamiliar, this is the symbol with a triangle pointing to the right with a vertical line right beside it. Multimeters usually make a loud beep if they detect continuity. 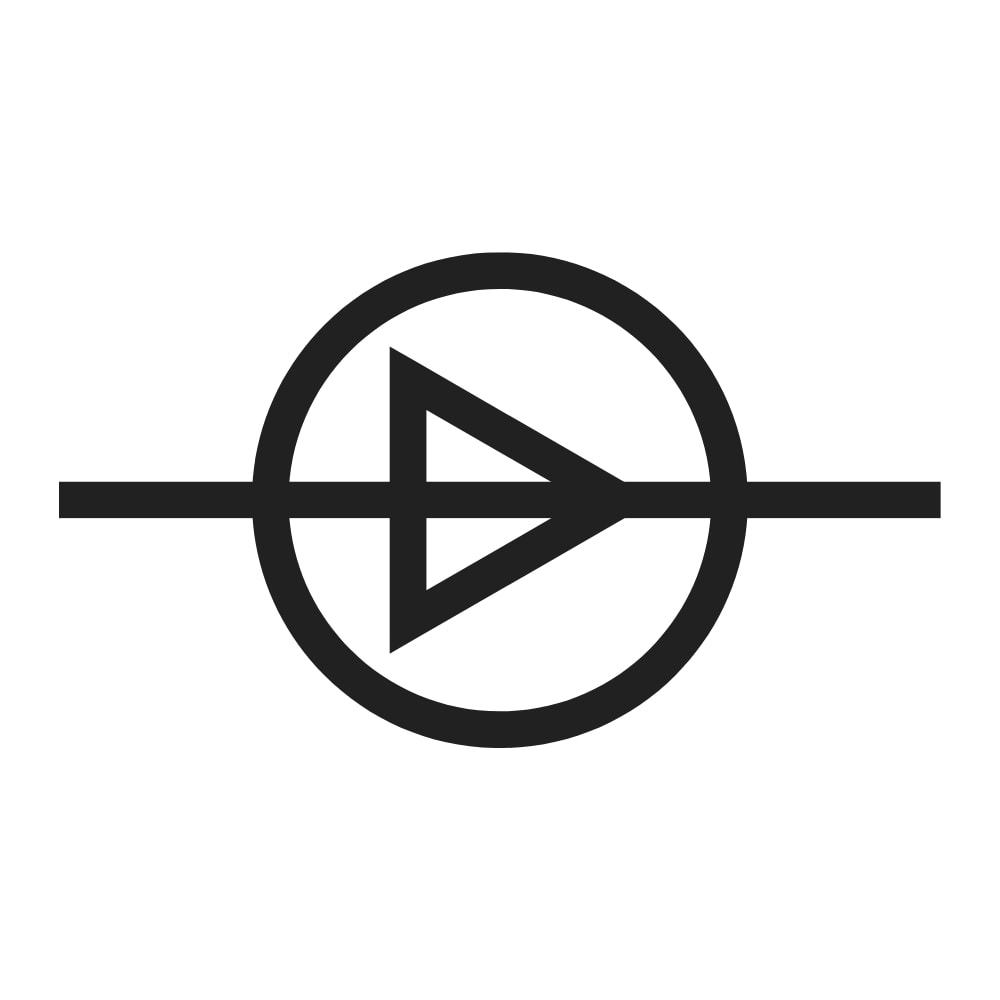 Measured in ohms (Ω), resistance refers to how much a wire or component prevents current from flowing.

A resistance of 0 ohms or very close to it signifies a good electrical connection – which is what you’d want to see in any kind of fuse.

Before we get into the nitty-gritty of testing fuses with a multimeter, it might be good to know that testing with a visual inspection can be an easier and quicker alternative.

Not all fuses can be tested by just looking at them though, however, as the casing must be see-through.

This means that only glass cartridges and automotive fuses with transparent plastic bodies can be visually tested.

Fuses that are in good condition have a clean and clear casing and the metal wire inside is intact.

Meanwhile, the casing of a blown fuse would have visible charring and discoloration. The metal wire within would also appear to have been severed or melted off.

This kind of test can be somewhat unreliable at times though, as some fuses can have discoloration and char even in normal conditions due to heat. This could prevent you from determining the actual state of the metal wire inside. 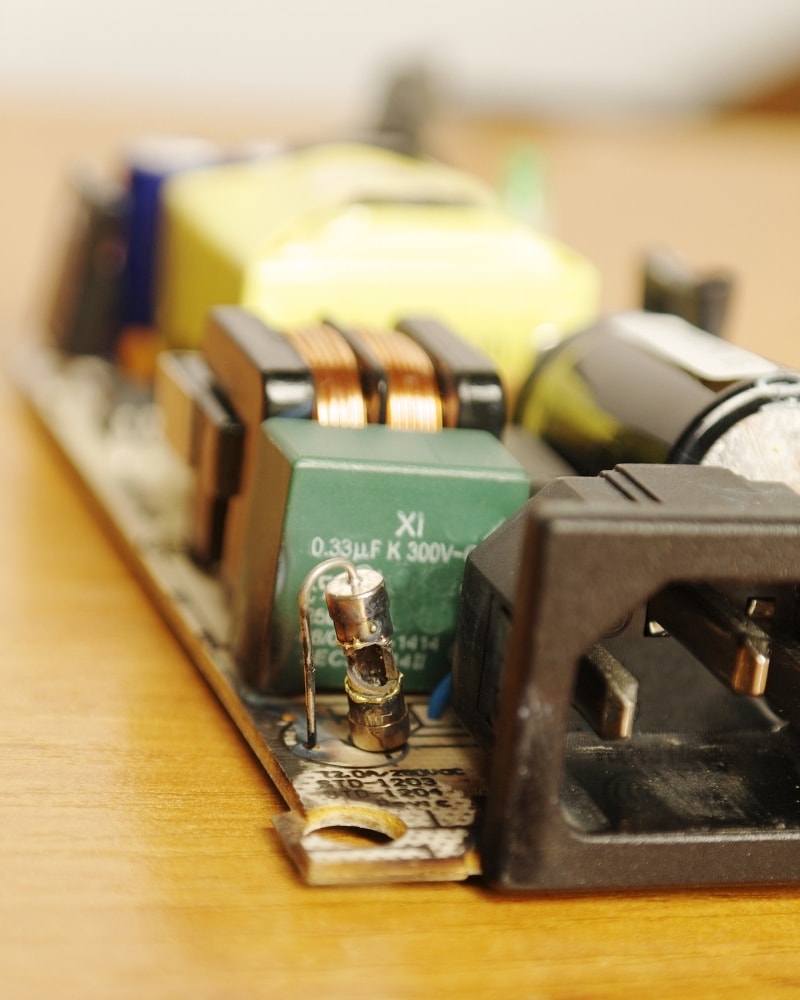 How to test a glass fuse visually? How to test an old house fuse with a multimeter? 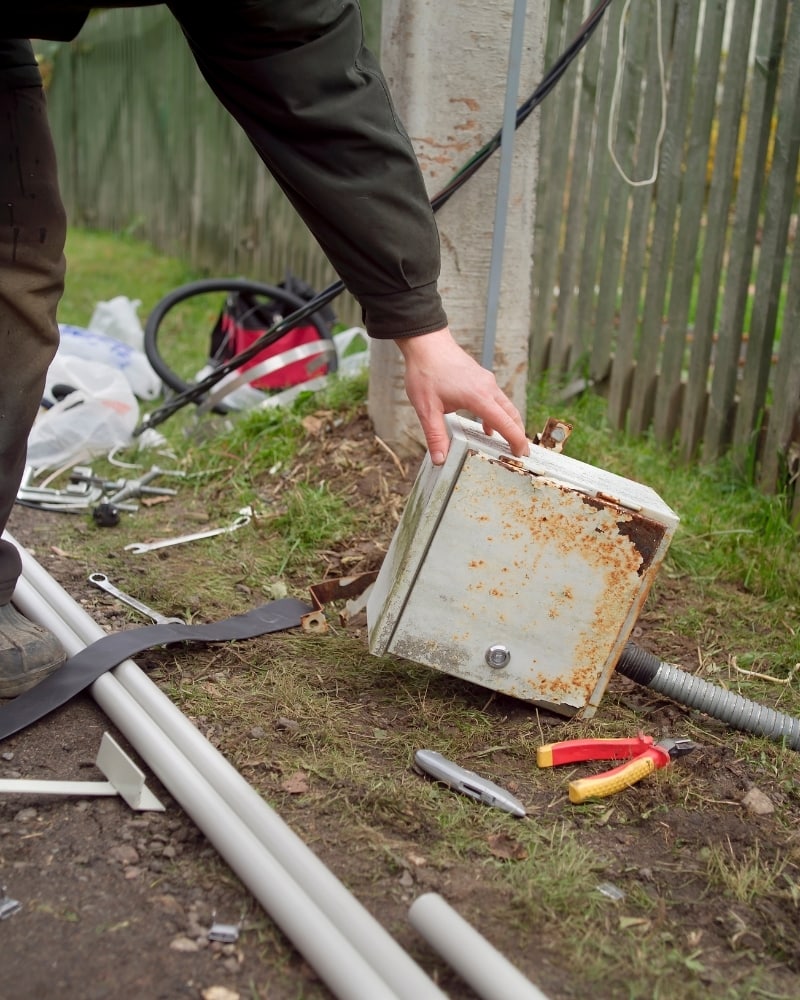 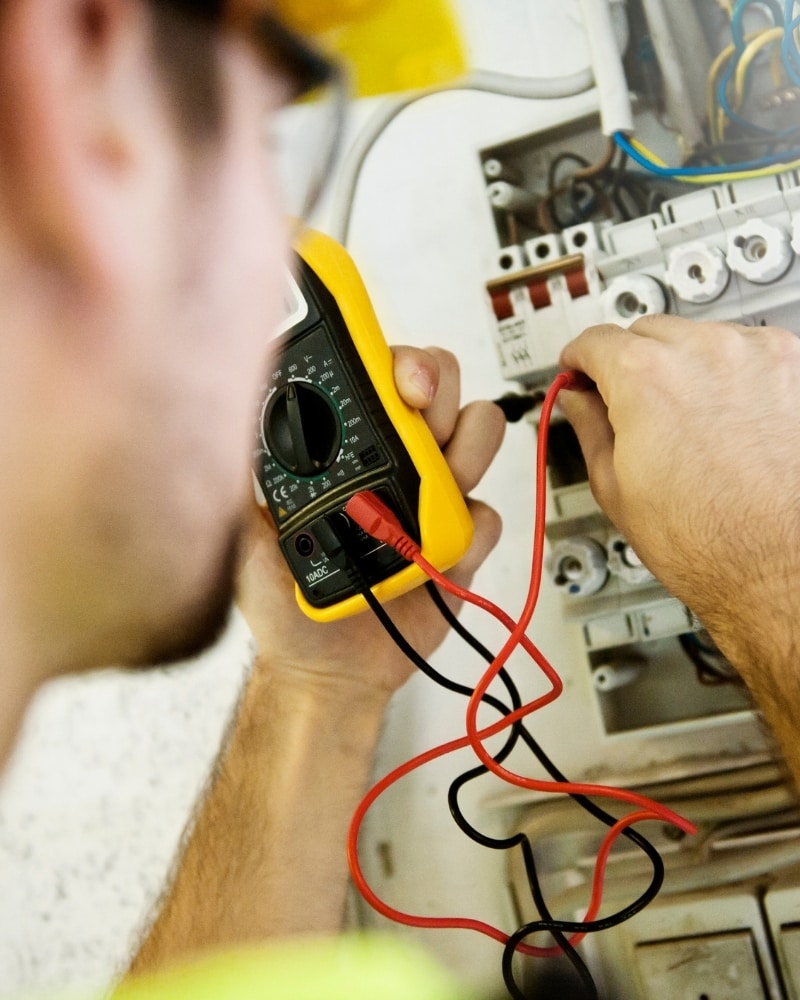 When testing a house fuse, it is important to take the necessary precautions as you might be exposed to high voltages.

Apart from this, a blown fuse usually indicates a fault in the house’s electrical wiring.

Thoroughly inspect and fix any suspect problems before going ahead with replacing the fuse and turning the power back on to reduce the risk of fire.

And never ever connect the circuit without the fuse in place.

It’s better the fuse blows than something else that’s its purpose is the weak link in the circuit to stop it blowing or melting elsewhere. 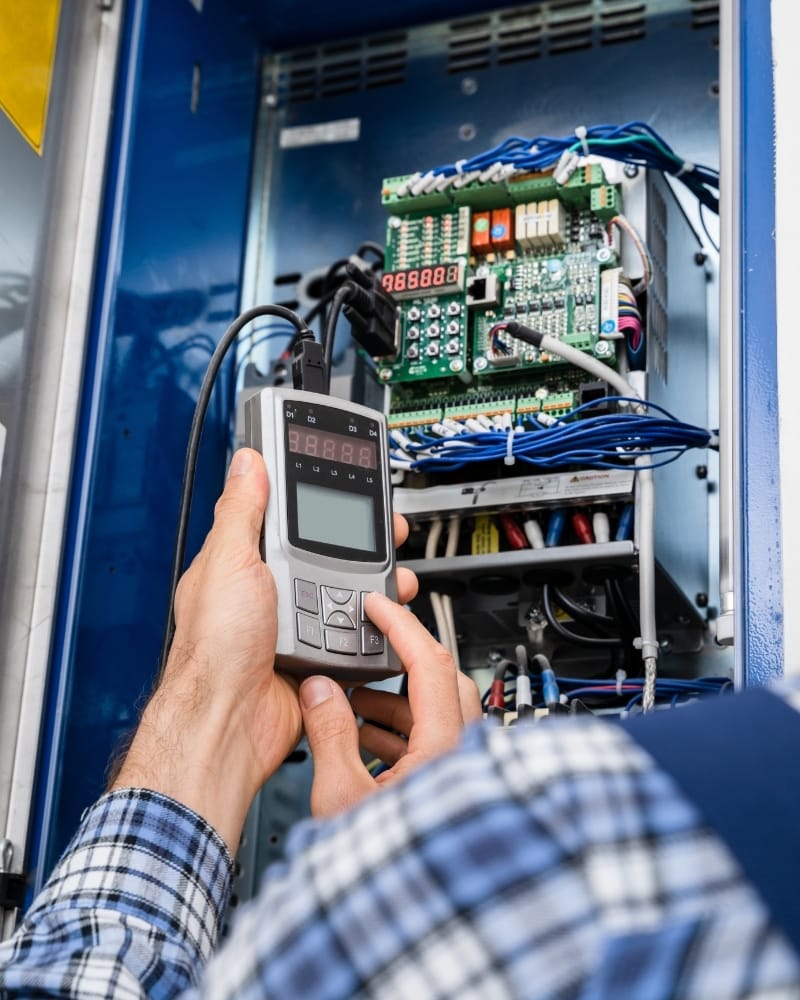 How to test a car fuse with a multimeter? 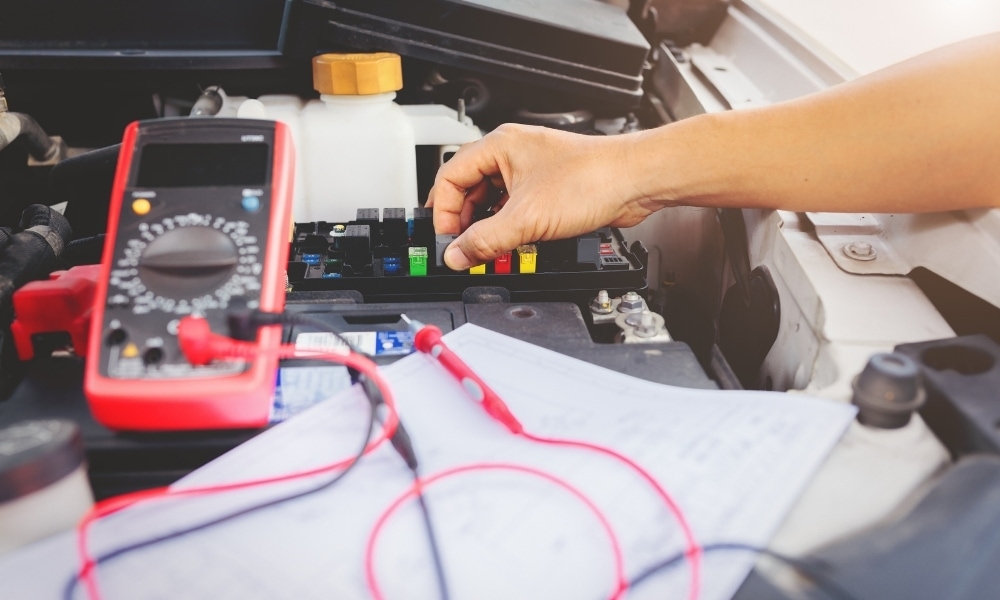 How to test a thermal fuse with a digital multimeter? You might be scratching your head when you’ve read that a multimeter has a screen that displays numbers while the multimeter you have available doesn’t.

It’s highly likely that what you have is an analog multimeter. It’s used mostly the same way as a digital multimeter but displays values differently.

Instead of a screen, an analog multimeter has a needle that moves along markers to display the measured value. 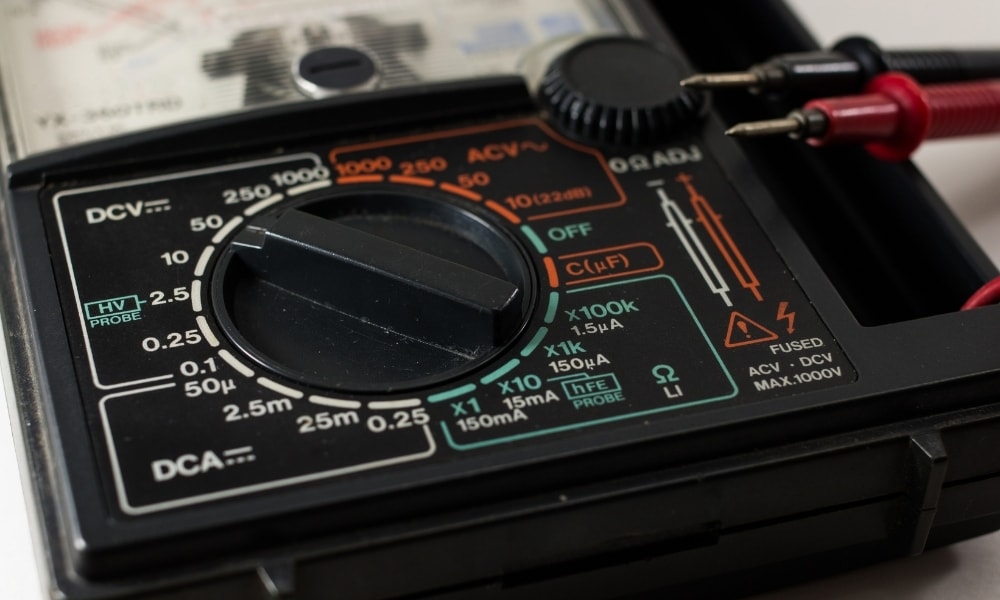 The measurement we’re concerned with here would be resistance, which is usually the topmost marker of the display and is labeled with the symbol Ω.

How to test a fuse with an analog multimeter?

Testing a fuse with an analog multimeter is a bit different since this type does not have a continuity test mode. Instead of that, you will be checking whether or not the resistance between the contacts is 0.

To do that, set the dial to measure resistance (Ω) and use the lowest possible setting with a 1x multiplier.

Touch the ends of each probe on each of the fuse contacts. If the needle moves all the way to the right (which is the 0 value), the fuse is in good condition. Otherwise, the fuse is blown or damaged and would need replacing.

How to replace a fuse?

When dealing with high-voltage circuits, especially for house fuses, it is important to disconnect the power to the fuse box before proceeding with the replacement.

You must also use the same type of fuse when replacing blown-out ones.

The replacement fuse must be close to the specification and rating of the old one (Or what your wiring should have, it needs to be the weak point in your circuit).

If you don’t know what the fuse parameters are for any reason you do the following to get the right one: 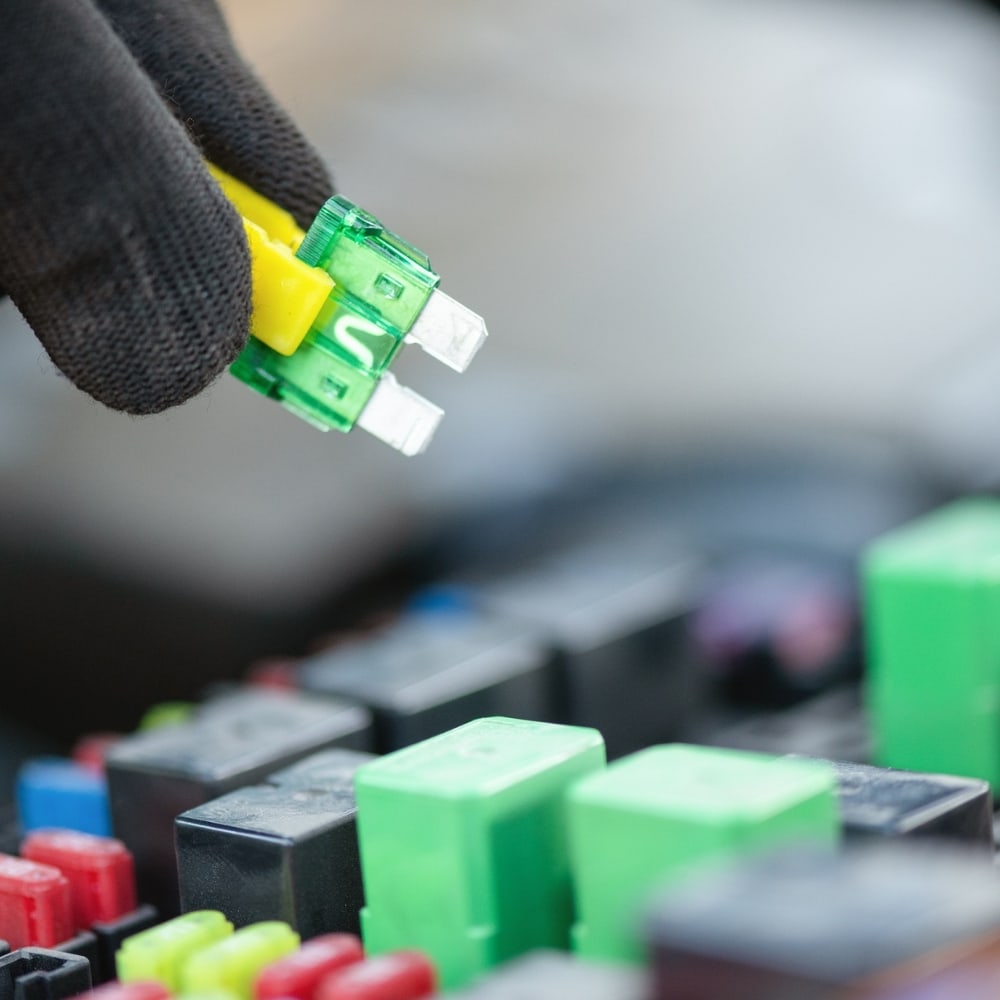 1. Check the wire diameter or gauge.

These have a wire ampacity chart that you can find online to see how much current they can safely carry without heating up too much and starting a fire.

Size your fuses accordingly, and check with a qualified electrician.

2. To determine the speed of the fuse, determine its application.

Devices and appliances with motors usually experience short current spikes during startup and a slow blow fuse is typically used with them.

Other applications such as household wiring and sensitive devices almost always use a fast-blowing fuse for greater safety.

Never ever replace a fuse with something sized larger than what was used before.

You should not also give in to the temptation of using a wrench or anything made out of thick metal as a short-term substitute while you go out to buy a new fuse.

This is dangerous and can lead to the wires connected to the fuse drawing too much current, heating up, and potentially starting a fire.

Fuses are essential safety devices in any electrical system. They’re mainly used to prevent fires by keeping wires from overheating from too much current during overload and short circuit events.

Therefore, testing to make sure that they are in good condition and replacing them when they’re not, goes a long way in ensuring your safety and peace of mind, and future use of your electrical system when they wear out and get old (Thermal fuses).

While electricians could work without a multimeter, you can surely gift them digital ones. Buy one for an auto technician or a non-professional because of its many applications.

Hopefully, if something goes wrong with any of your electrical systems, you’ll know exactly what to look out for and do if you think the culprit might be a bad fuse. Make sure to check for an authentic tool for accurate measurements. Till next time.

Hi, my name is David Walker, and thanks for reading this article!

As a leading mind in construction and engineering as a mechanic,  and a car restoration enthusiast I share some of my tips here at Bangingtoolbox for young men to grow their practical abilities and skills in their garage or workshop.

If you have any questions about your car restoration projects or if you have any bright ideas or queries you can find out more here.