Battery capacity is how much energy a battery can provide on a full charge. This means that bigger batteries with a higher capacity will last longer in the same application than smaller ones. Unfortunately, a battery’s actual capacity can be far less than advertised. This could be due to the battery’s age, damage within the cells, or false marketing.

Regardless, it is important to know how to measure battery capacity with a multimeter and find out your battery’s true capacity. And see how much energy gets consumed or if your battery is close to the same as when it was new.  One of the easiest ways to take the required measurement is by using a multimeter and a simple calculation.

Electrical measurements you need to know 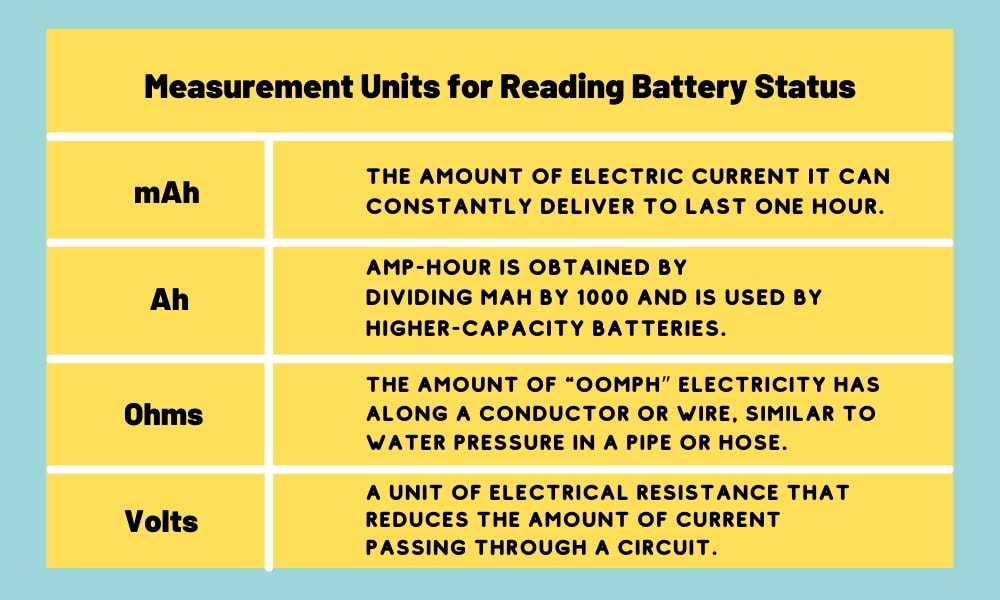 What is the technical measurement to work out battery size/capacity?

While mAh is typically used to advertise capacity, it does not actually show the full picture of how much energy a battery contains.

Batteries with the same Ah rating can have different capacities if their voltages are different. A more accurate measurement is Watt-hours (Wh) which can be calculated by multiplying Ah with the supply battery voltage.

What is the technical measurement for determining battery charge?

Because of the way batteries work, their remaining charge can be determined by measuring their sitting volts. This is the voltage across the positive and negative terminals of the battery and varies with the remaining charge left.

If a battery is at its maximum sitting volts, it means that it is fully charged.

The basics: What is a multi-meter if you don’t know?

A multimeter is a tool with multiple functions that are essential when working with measuring battery capacity and electricity. They can help you determine common electrical measurements such as resistance, voltage, and current.

Parts of a multi-meter

1. Display – This is a screen that shows a readout of measurements.

2. Function buttons – Depending on the model, you may have one or more buttons below the screen.

The first is typically a “data hold” function that freezes the measurement shown in the display.

The next most common button is a “screen backlight” button for work in dark environments.

3. Dial – Used for selecting the value and range of measurements. It is also used to enter “continuity test” mode to detect shorts or breaks in an electrical circuit.

4. Input Terminals – Located below the dial, this is where the probes will be plugged into. Reading a battery voltage with a multi-meter? 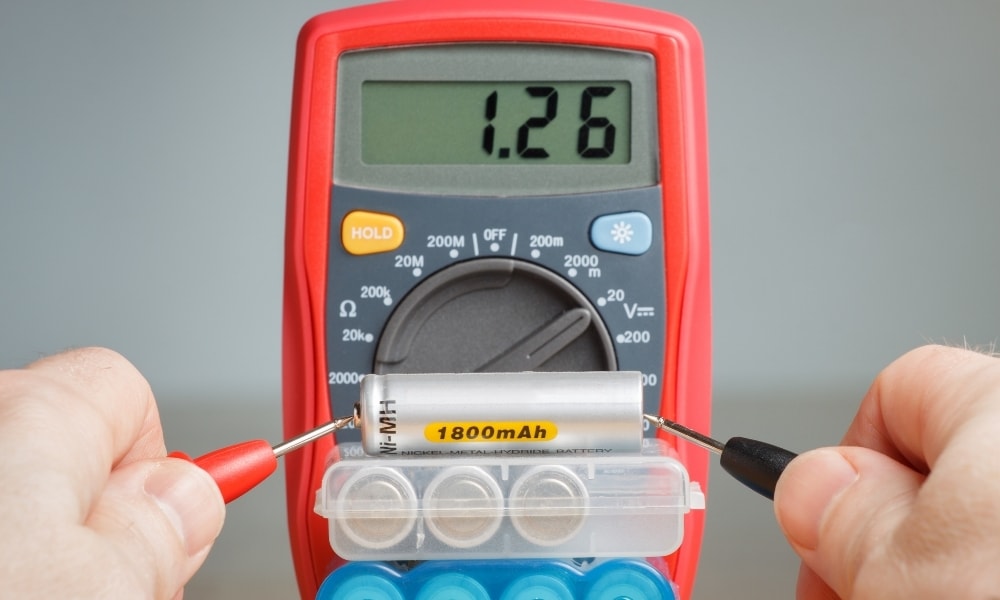 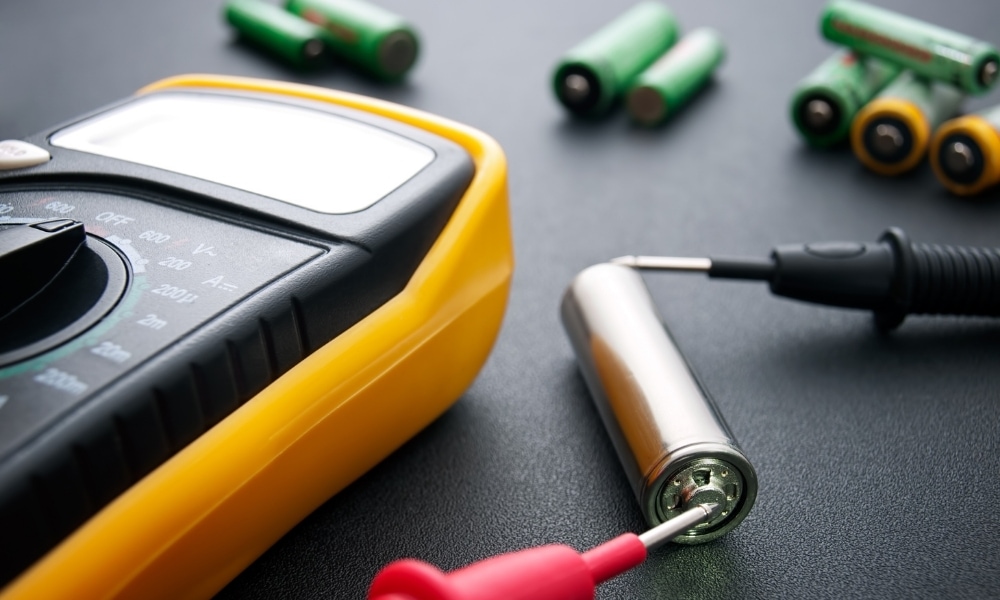 What does voltage drop mean?

Voltage drop is a reduction of the voltage reading on an electrical component or battery caused by excessive resistance [2] such as an electrical load.

For example, if a battery is powering some equipment the voltage is going to drop as energy is being drawn. This means that you cannot measure a battery’s captivity while a battery is under any load.

For accurate measurements, you should let a battery sit without any draw or a charge for an hour before taking a voltage reading.

Basically, the presence of a voltage drop or voltage increase means that an electrical current is being used or currently being charged.

Voltage drop can be measured by connecting multimeter probes on both the positive and negative terminals while taking the absolute value of the readings before and after a load.

How to know a battery’s charge by reading its voltage?

Battery charge can be determined by measuring the sitting volts.

Most battery-powered devices, such as phones and laptops, use this method as it is an accurate way of measuring battery percentage.

Because of the way batteries work, the rated voltage of a battery is usually its sitting volts at 50% charge, while full and empty voltages are slightly higher and lower respectively.

Refer to the chart below for the most common battery types: 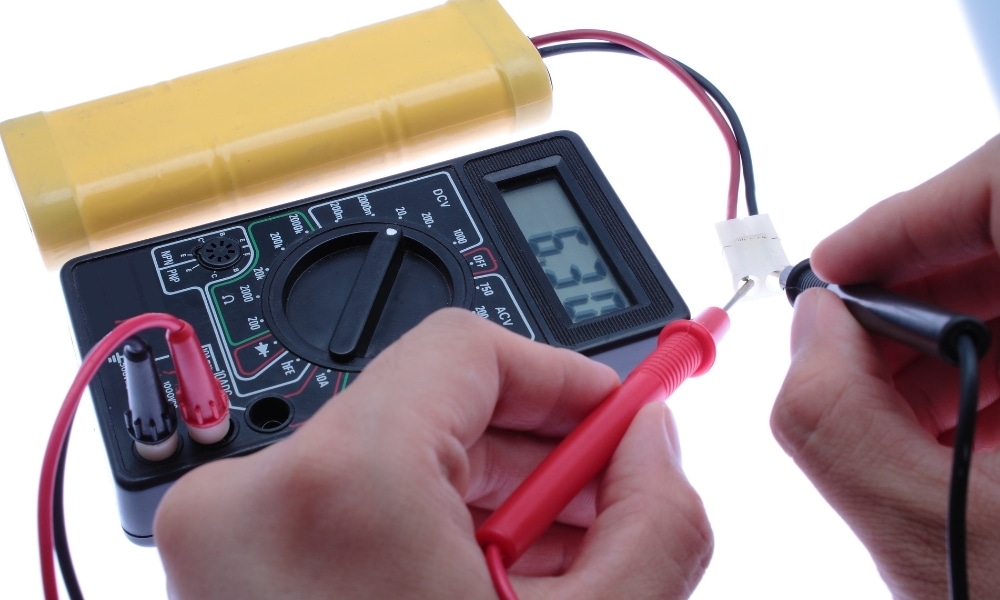 What does it mean if a battery cannot reach full charge?

If your battery is not reaching the appropriate voltage for a full charge or drains too quickly, the battery itself might be the culprit.

As batteries age and undergo multiple charge-discharge cycles, the cells inevitably get damaged. This reduces the capacity of the battery over time.

This effect is speeding up further if you use fast-charging methods that cause the battery to heat up too much in the last stages of a charge.

Measuring battery capacity with a multimeter is an easy way to determine how much your batteries have aged. 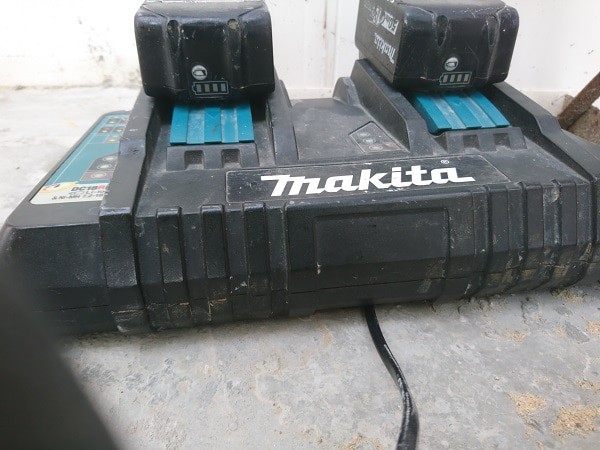 To discharge your batteries, you need something to consume the energy from the battery. This can easily be done using a load resistor which turns electricity into heat.

To determine the appropriate resistor, refer to the voltage and maximum drain current that the battery type can provide.

The value of the resistor can be calculated by dividing the voltage by the current (in amps).

For example, checking the capacity of an AA rechargeable battery with a multimeter can output a maximum of 50mAh at 1.2V. This means that the resistor should be 1.2/0.05 = 24 ohms. This is to keep track of how long the battery empties from a full charge. You can use a dedicated stopwatch or an app on your phone.

Of course, let’s not forget the multimeter which we’ll need to measure the sitting volts of the battery.

If available, opt to go with probes with alligator clips to make it easier to hold everything in place.

How to test battery capacity with a multimeter? Once you’ve got the battery fully discharged and tracked how long it took to get there from a full charge, you can now estimate its capacity.

The formula for mAh is in the name itself – multiplying the drain current with the amount of time it took to fully discharge the battery (in hours).

Remember that this is still an estimate as the current would have been decreasing with the sitting volts throughout the run (because of Ohms Law).

The actual capacity then would be slightly less than this.

After estimating the capacity of your battery, you might find that it’s either well within or far off their advertised ratings. In the case of the latter, there are a lot of reasons why some batteries do not reach their advertised capacities.

One of which is the voltage output used. Manufacturers of power banks for phones and gadgets, for example, are notorious for this.

They advertise the capacity of their batteries based on the 3.7V cell voltage and not on the 5V that the USB ports and chargers use.

This effectively means a 26% loss in capacity while not yet accounting for the voltage conversion inefficiency.

Another reason could be that the battery is old or damaged. You can also use a multimeter to measure a lot of objects.

Using a multimeter is one of the easiest methods of determining battery capacity. It’s a fast and reliable way to determine if our batteries are up to spec. These batteries are unlike solar batteries that can recover lost energy by bringing them out to the sun or cleaning the solar panels .

There are a lot of reasons to doubt battery capacity given that some manufacturers advertise capacities higher than actual. Batteries are also quite sensitive and tend to age and degrade quickly. You also know how much energy it still has to run your brushless tools .

Despite all of this, we know something we cannot doubt – that batteries have revolutionized the way we use our gadgets and tools.

When it comes to cordless tool brands like Makita and DeWalt tool sets they have reliable batteries included in their kits.

How helpful was my guide?

Hi, my name is David Walker, and thanks for reading this article!

As a leading mind in construction and engineering as a mechanic,  and a car restoration enthusiast I share some of my tips here at Bangingtoolbox to help other DIYers to grow their practical abilities and skills in their garage or workshop.

If you have any questions about your car restoration projects or if you have any bright ideas or queries you can find out more here.