Checked and updated on April 5, 2021 by Aaron Barnett

Hammers have been around for millions of years and have remained relatively unchanged. They are one of the most basic yet essential tools that humanity has discovered and used. Hammers are used to exerting sudden force on an object to either shape it or drive fasteners into surfaces. Contrary to popular belief, hammers actually have several parts.

The common names for parts of a hammer include the face, head, pein or claw, throat, handle, cheek, and eye.

Some of the more specialized hammers have unique parts such as a hatchet or pick. This guide discusses the various parts of a hammer and its functions. Early use of a hammer

Before we dive deep into hammer parts, let’s look at its history to have an understanding of how the modern hammer was developed. In fact, a lot of the parts of a hammer are quite ancient.

The hammers that resembled those of what we see today started popping up around 30,000 years ago. This enabled humans to craft more precise objects such as weapons, jewelry, and even sculptures. This also allowed humans to work faster and more efficiently.

Even before, there were already numerous types of hammers that catered to the needs of the various artisans that used them.

In this article, you’ll appreciate the uses of each part for different DIY projects like fixing  a laminated floor, woodworking, roofing, blacksmithing, or just any DIY project that sells. 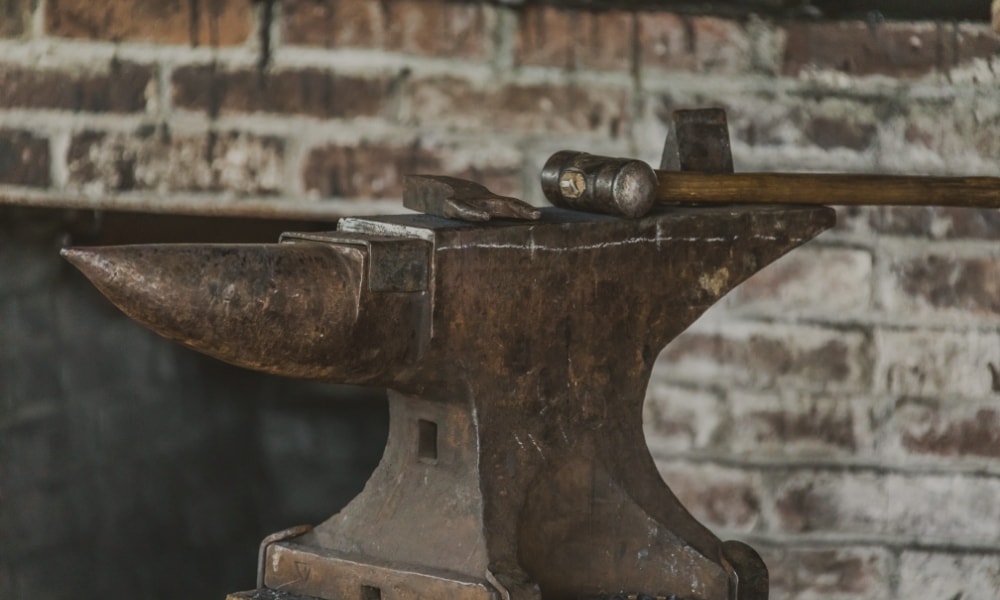 The face is the most recognizable part of a hammer. It’s the part that makes contact with the object being hammered. Its surface is what takes the brunt of every impact and is intentionally made sturdy.

There are a lot of different shapes for faces, with some being bigger or smaller than the actual head size. Most of them share the same characteristic of being flat so as to spread out force from an impact more evenly.

These faces may also have different types of surfaces. While a lot of them are smooth, some are milled and have a specific pattern or texture, such as in the case of a bushing hammer.

A few hammers also feature two faces on both sides like mallets and sledgehammers. The hammer’s head is often the most important part and dictates how a hammer will perform. A hammer’s head has to be made of strong and compacted material to tolerate the force generated by striking against surfaces.

Most of a hammer’s mass is concentrated on the head to maximize the impacting force. While some prefer a heavy head, others work well with hammers that have a light head for better accuracy.

A hammer’s head also comes in various shapes depending on the type and application where it’s needed.

The head of a common hammer is solid and usually made out of steel; it’s light enough to allow the hammer to be carried in one hand.

Meanwhile, heads of mallets are made out of wood or rubber and are barrel-shaped so that both sides can be used as a striking face.

Similarly, a dead blow hammer is also barrel-shaped, but its head is made out of durable plastic and is hollow but filled with material. Its head is specialized in that it reduces impact damage on the surface and reduces rebound.

A sledgehammer is like a super heavy-duty mallet as its head is made out of solid, heavy steel that helps generate more momentum and force. The weight and the double-face are the most distinguished features if don’t know what are the parts of a sledgehammer. Common in metalworking, peins or peens are very useful for where strong force is needed. Especially when shaping or forming metal, peens are uniquely shaped impact surfaces that contrast the usually flat surface of a common hammer’s face.

Peens help metalworkers better manipulate material, with a bit of elbow grease that is.

There are three common types of peens.

This type is common as its main task is to harden metal by hitting the surface at a very small point. It can also be used in striking punches or chisels and for rounding rivets.

This peen is shaped like a blade that’s perpendicular to the handle and focuses the impact force in a straight line. Cross peens are common in blacksmithing and are used for forging.

It is a cross peen but rotated 90-degrees so that the blade is parallel to the handle. While optimized for blacksmithing, straight peens can also be used to safely strike nails held by two fingers. For carpentry and woodworking, a hammer’s peen is replaced with a claw. Generally, claws are two metal prongs separated in the middle so that they can act as a pry bar.

The most common type is the curved claw and can be found on normal carpentry hammers. Curved claws are mainly used to pull out nails from wood and other surfaces.

Additionally, another well-known type is the rip or straight claw. This claw is used to separate two pieces of wood that have been nailed together. A hammer’s neck connects the handle to the head. It’s important as it needs to be strong enough to resist impact and not have the head fly off and injure someone.

It’s also the part that transfers the motion of the user’s hands from the handle to the head.

Another function of the neck is to provide a balance between the head and the handle. Its length varies depending on the type of hammer and the head’s weight.

The hammer’s cheek is the part of the head that holds the hammer together. This is the part that experiences the most physical stress during every hit, being the point where the head and neck are joined together.

The eye is a hole at the bottom of the hammer where the neck and handle are inserted. This allows the hammer’s head to be easily slipped onto its handle.

These are common on wooden and rubber hammers as they are usually crafted from separate pieces.

They’re uncommon on steel and other metal hammers as the head, neck, and handle are often cast into one piece.

The handle grip is where you hold the hammer. It’s shaped larger than the neck to ensure that the user has a proper and firm grip so that the hammer doesn’t fly off when striking.

Most handles are ergonomic, combining high functionality while eliminating fatigue. The body material of a hammer dictates many of its properties. On one hand, it says how strong a hammer is and what it can hit without breaking. On the other is how certain materials absorb impact and minimize rebound.

Steel body. Hammers are usually made out of steel as it’s strong, lightweight, and relatively cheap. However, it’s quite stiff and can transfer a lot of energy and vibrations from striking your hand.

Titanium body. Titanium hammers are also available if more grunt is needed. Titanium can withstand the same amount of force as steel but transfers 30% fewer vibrations and recoil.

Aluminum body. Aluminum bodies, though lighter, can sometimes be worse than steel with regard to vibration dampening. Here’s how Estwing swingers overcomes the trouble with aluminum and steel hammers.

Some specialized hammers can also cut objects by having one of its faces as a hatchet. A hatchet is simply a small axe and can be used to cut wood and other soft materials. Hatchet hammers are commonly known for this feature.

Hatchet hammers are good for carpentry and woodwork since their versatility allows them to both cut and drive material.

Another hammer that features a hatchet is the drywall hammer. These hammers are used to either put up or demolish drywall.

The hatchet is used by plasterers to cut wooden slats quickly without needing an extra tool. Chisels are sharp-ended tips that are used to strike hard materials such as wood and rock to chip material off.

Meanwhile, picks are point-ended tips used to break or split rocks. These hammers are normally used for rockwork and geology.

Hammers with pick or chisel The hammers that we have discussed are also known as manual hammers. Now that we know what the parts of a manual hammer are, let’s look at the most popular and common ones available

The most common hammers are made of steel as they are cheap, robust, and easy to manufacture.

Popular and good quality hammers come from the likes of Estwing and Stiletto.

Stiletto notably makes great titanium hammers such as the TI14MC, while both have a wide assortment of quality hammers for almost any application.

Hammers have been around for countless years and have helped humanity evolve and build new technologies. Though their design remains relatively unchanged, the hammer will always be a staple tool for any craftsman doing both common and specialized work.

No matter how simple a hammer is, it will always be a versatile tool because of the fact that certain types can be modified, redesigned, or changed to fit a variety of different applications.

At the end of the day, a tool is only as good as the one who wields it; hammers might be manual, but with enough skill and experience, you may be able to outperform even the best power tools.

If this is the first time you’ve ever heard of the different parts of a hammer, then congratulations! You’ve grown wiser. This quick guide hopefully makes your hammer-choosing a bit easier and as a famous artist once said, “It’s Hammer Time!”