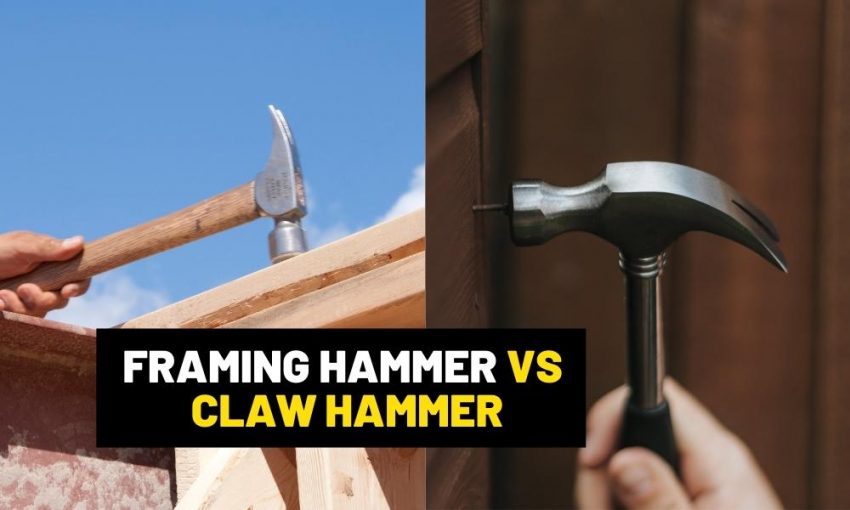 The visual difference is that a claw hammer has a curved claw at the end and a framing hammer has a long straight claw and a longer handle for a harder more powerful swing.

But there are other differences.

However, the decision to use one over the other or both in tandem comes down to what you need to do.

If you’re a new builder, homeowner, DIY enthusiast, or just someone who likes to spend quality time in the workshop, there’s a good chance you’ve used both a framing hammer and a claw hammer.

But do you know the difference between the two? As their names suggest, these hammers have different functions.

Nonetheless, these two types have many similarities, which makes choosing between them quite a challenge for many who don’t know there is a difference.

You should also look at the weight difference of each type of hammer, following with the handle size, as well as the material each hammer type is made from.

To help you make the right decision for the job at hand, we’ve put together a list of the main differences regarding framing hammer vs. claw hammer and when to use what. 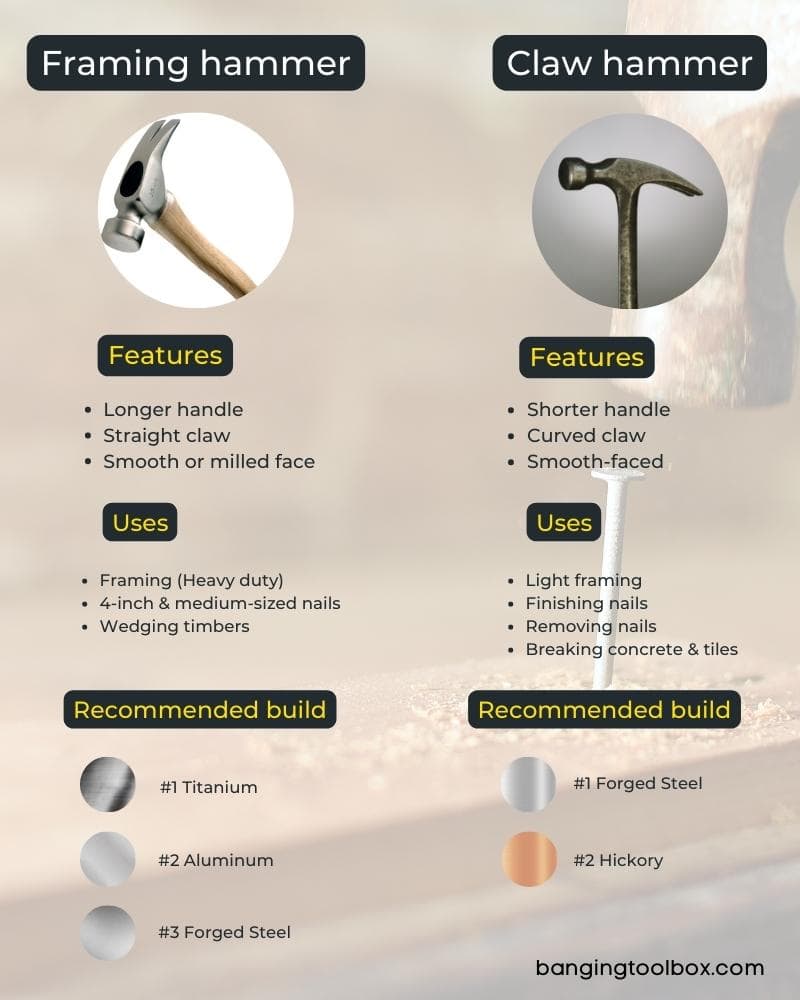 Why is a framing hammer different to a regular claw hammer?

A framing hammer is larger and has a softer face than a claw hammer.

The head of a framing hammer with a claw is normally heavier, and the claw is straighter for wedging timbers rather than pulling out nails.

The straight claw framing hammer is perfect for driving nails into lumber, as the name suggests – framing [1]. When should you use a framing hammer?

Framing hammers are most commonly used for framing only jobs. Not so much demolition or finishing jobs.

The framing claw hammer is way better at driving both 4-inch framing nails and medium-sized nails, thanks to a manufactured head weight distribution to effortlessly sink nails into hardwood without as much arm force because of the long handle that gives better leverage.

You can also use a Framing hammer alongside a claw hammer for demolition work and finishing work although the framing hammer with the long straight claw is better for wedging timber pieces apart. But not as good for breaking concrete, or removing nails. 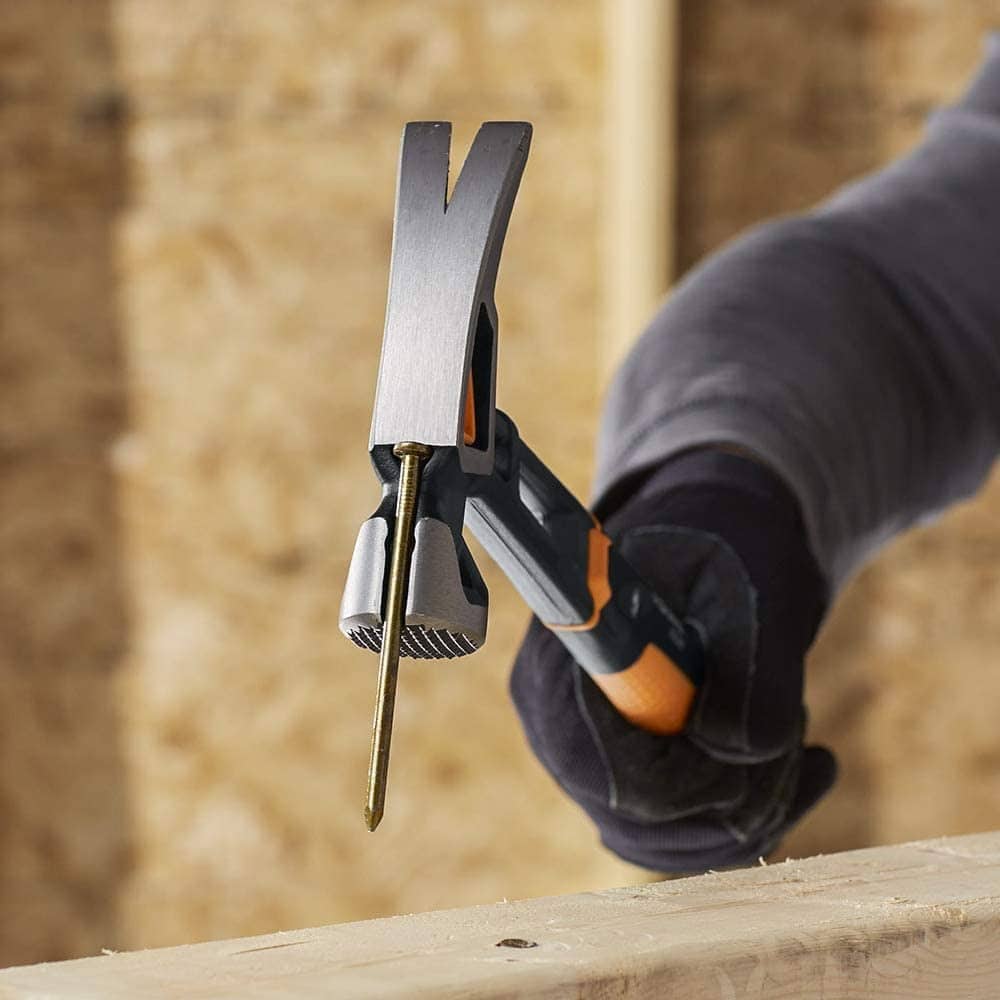 When should you use a claw hammer?

Claw hammers are best suited for DIY projects where there is no need for repetitive nailing, this option works as a more all-round hammer, used in partnership with a nailgun.

The claw hammer’s thinner and lighter head, with a curved claw, is better for extracting nails without damaging your work surface. You can also use a claw hammer for breaking concrete or tile due to a stronger more rigid build.

Nonetheless, you can still use a claw hammer as a substitute for a framing hammer on most projects, especially if you primarily use a nailgun.

A claw hammer is lighter and better at removing nails, while still capable of installing large nails and finishing nails, due to the slightly smaller size. 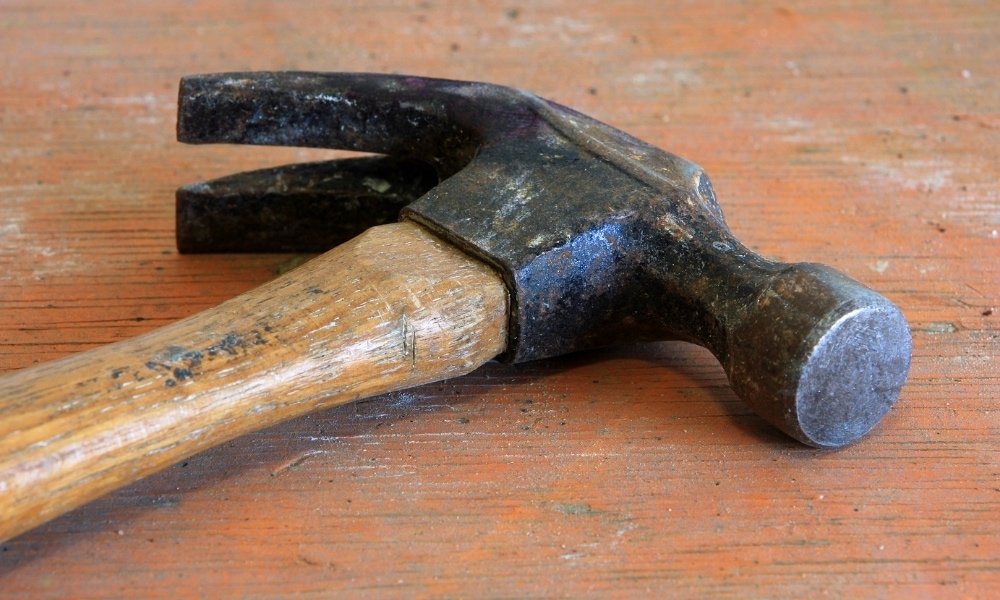 What material should your hammer type be.

Don’t bother with claw hammers that are made from.

Can break early with any demolition work, or even normal use.

The material that your hammer is made from makes a big difference for what you are doing.

#2 Aluminium framing hammers – Lighter than titanium but not as strong as steel.

Don’t use framing hammers that are. Fiberglass, hollow steel or not single forged.

These hammer materials have no lightweight benefits and will break within a year of even normal use.

Features comparison between the two

So, what is the difference between a framing hammer and a claw hammer?

Both framing hammers and claw hammers have similar features: a metal, wooden, or plastic handle, adjustable torque based on your hand position on the handle and the length of the handle, and a magnetic nail starter for some of the higher ranged hammers.

However, both types have distinct physical features that make them more suited for specific tasks. 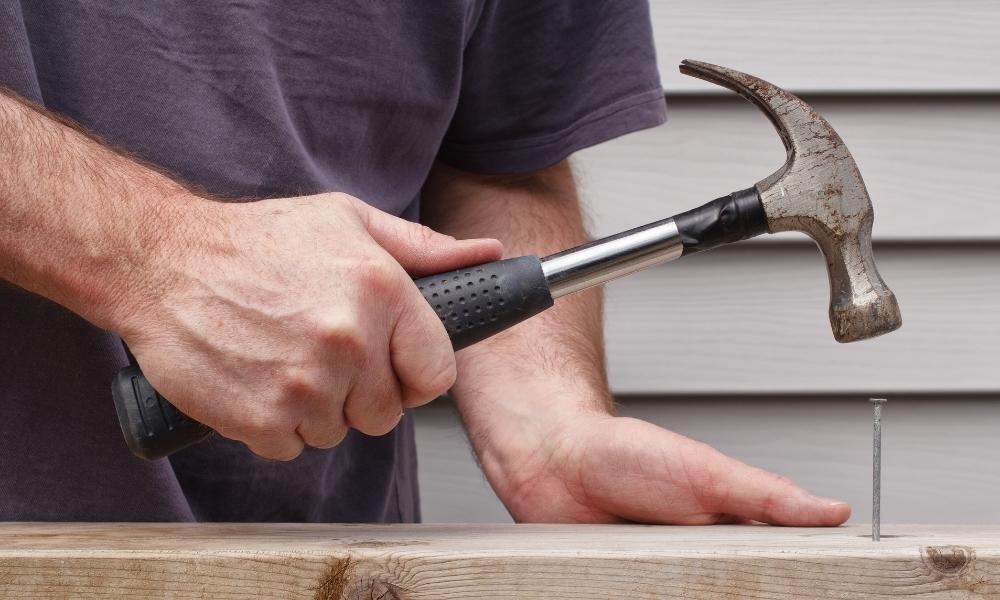 How good is the head?

The framing hammer features different head options from smooth to a jagged surface for nail grip in some models in our reviews it can be interchangeable and replaceable.

The waffle face helps prevent the head from slipping during use. The waffle face also reduces vibration and makes your machine easier to drive nails into hardwood.

On the other hand, a claw hammer’s head is smooth and made of tempered steel that does not dent easily during use.

The claw hammer also has a smaller and lighter head, perfect for extracting nails and having a lighter tool strapped to your tool apron. 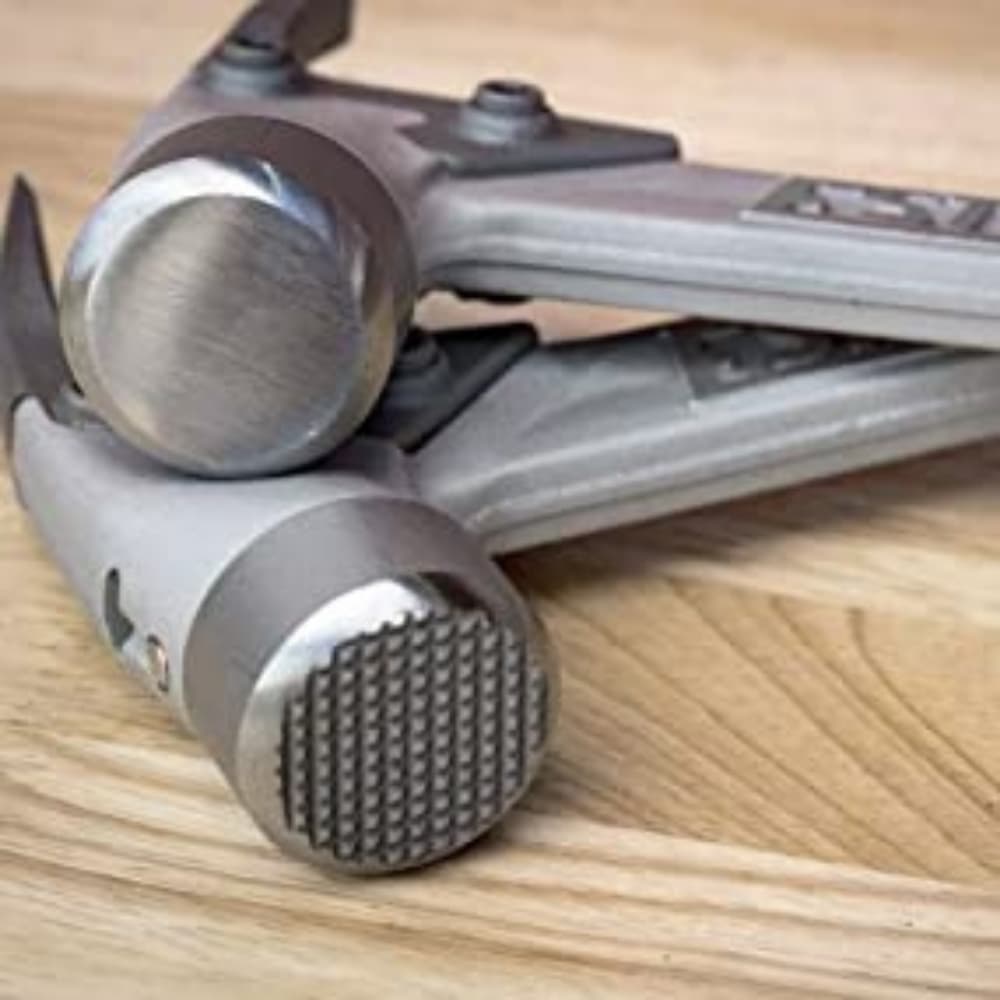 The framing hammer has a heavier and softer head, allowing blows that drive large nails into lumber more easily with more weight.

This is unsuitable for breaking concrete or tile as the head would take a lot of damage when struck against hard surfaces.

While instead, a claw hammer is better at breaking concrete or tile due to the harder steel from manufacturing but won’t have the extra weight of a framing hammer to drive nails into lumber as easily. 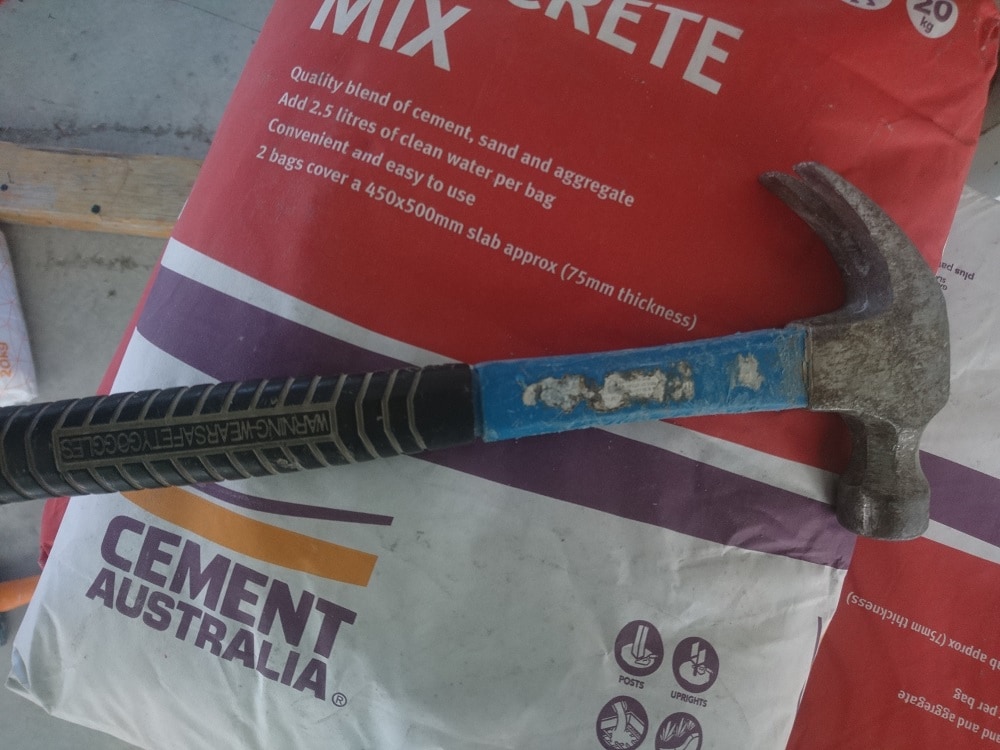 Don’t use a fiberglass handle, they can be lighter but can easily snap in half during use.

Both the framing hammer and claw hammer can have a metal, wooden, or plastic handle for a comfortable grip for better durability.

However, a framing hammer’s handle is longer to increase torque and leverage on each swing.

This makes driving nails into harder surfaces easier and reduces repetitive strain on the builder’s arm.

The claw hammer’s handle is slightly shorter than the framing hammer’s generally but this results in slightly better control and increase accuracy for important jobs. 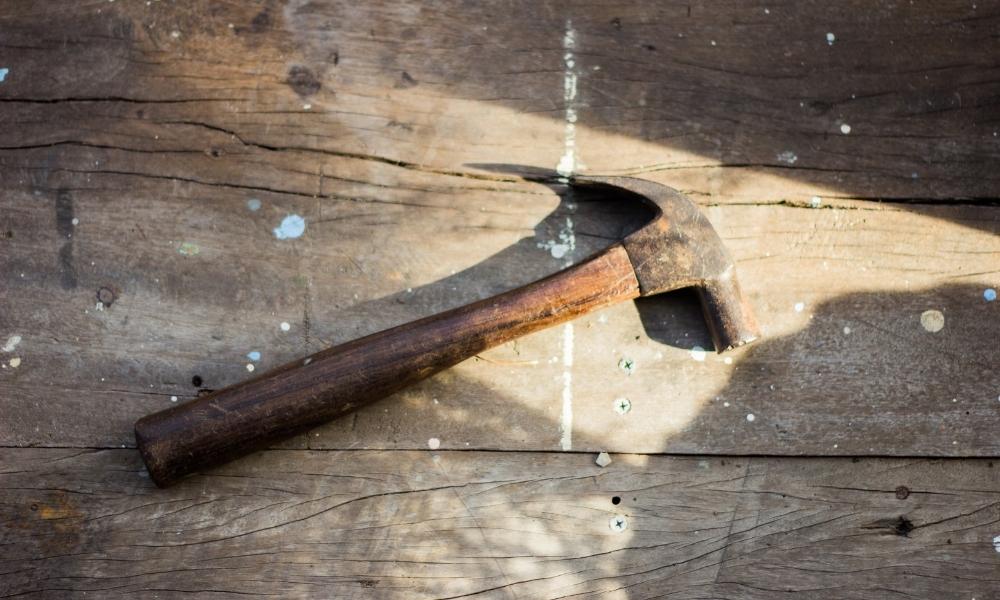 Swinging a framing hammer vs. a claw hammer

When swinging a hammer, it’s important to understand the specific tool types’ function.

Since a framing hammer has a larger heavier head, you need more strength to swing accurately, but this type of hammer delivers more blow force than the effort your give for motivation.

This makes it an ideal tool for DIY projects like wall stud installation.

A claw hammer is lighter and easier to swing.

This is an ideal tool for DIY projects, general framing jobs, and finishing jobs including simple tasks around the house.

When swinging a framing hammer with a rip claw, use your forearm and shoulder muscles to generate more power. A titanium rip claw is lighter but delivers as much strength as a steel one. Striking nails with a Framing hammer vs. a Claw hammer

Framing hammers have more torque than claw hammers, making them perfect for driving nails into hardwood or repetitive hand nailing if you haven’t invested in a nailgun yet.

On the other hand, a claw hammer may function in striking nails, but it’s not as ideal as a framing hammer for driving large nails. This is because a claw hammer is a lighter tool but also more versatile for a bigger range of applications.

Take note that hand-driven nails are stronger than nails from a nail gun. Framing hammer vs. Claw hammer if you only pick one

When choosing between these two hammer types, your choice boils down to the job at hand.

A framing hammer is the better option if you’re doing heavier construction work that involves pounding nails into lumber [3].

I use my claw hammer 95% of the time because I have a nail gun. A lighter more accurate hammer is more versatile overall in your carpenter’s apron.

However, if I was mostly a wall framer I would use both. I primarily do setting out and finishing work and a claw hammer works better. 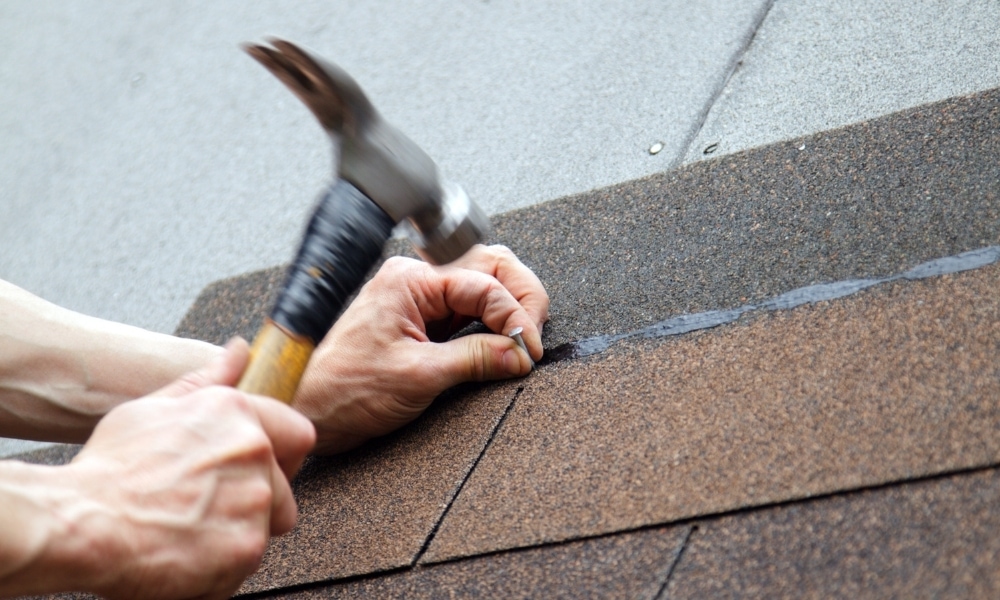 What are the most popular brands amongst builders?

The building sites today are flooded with a variety of hammer brands. However, the most popular hammers amongst builders come from Estwing, Stiletto, Yiyitools, Stanley, and Vaughan for DIY. Other notable brands include Dewalt, Wilton, and Lincoln.

These companies have grown to become household names thanks to their focus on quality, innovation, and affordability.

Dewalt framing claw hammers and the long-standing Estwing claw framing hammer have especially held a lot of popularity in the industry thanks to their quality and lifelong durability guarantee. 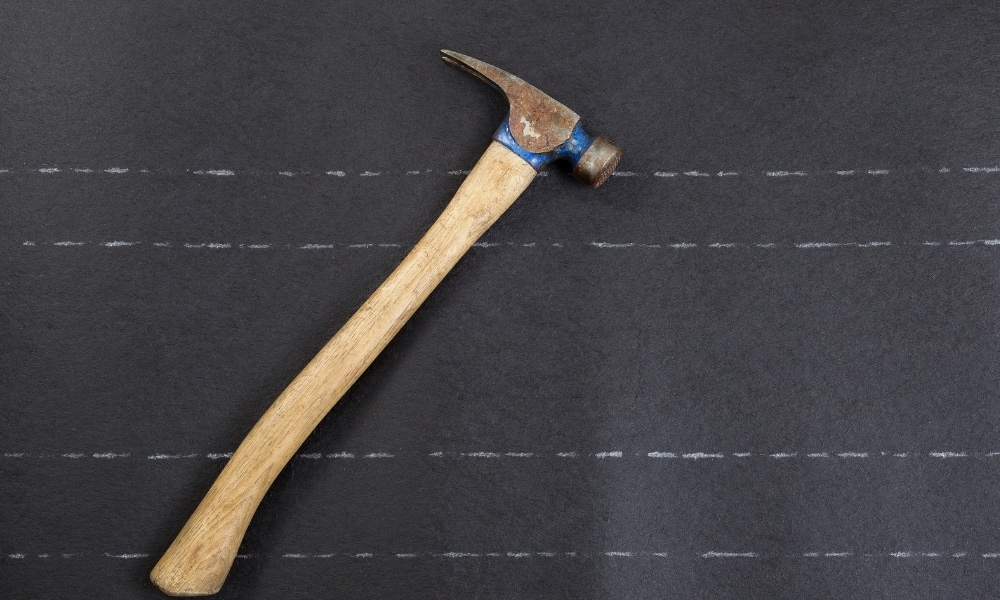 There are a number of similarities between these two types of framing hammers, but don’t get them twisted.

Hammers are quite different from each other in terms of function and use case scenarios.

However, both framing and claw hammers perform their basic functions well when used appropriately.

You should buy both hammer types if you’re in the building trade, or maybe just get a single claw hammer that best suits your needs.

To conclude, a framing hammer with a straight rip claw is a little better for wedging compared to a claw hammer. But a claw hammer is more popular and more widely used for overall versatility. 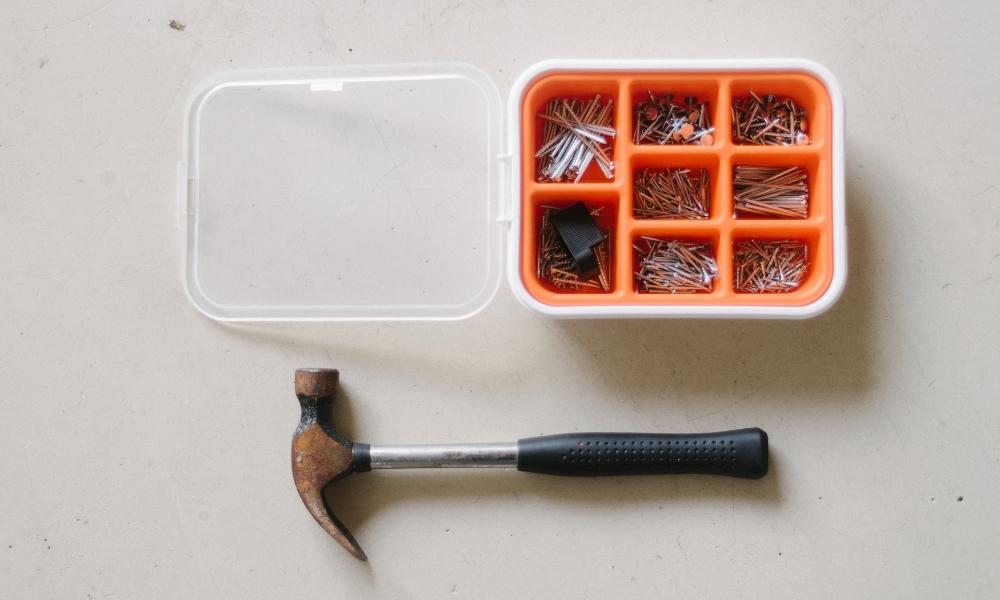 If this is what you got – time to upgrade.