Taps and dies: the basics

Taps are used to cut and form the female part of thread or nut, while the die cuts and forms the male end, or bolt. With taps and dies for threading, they can make your projects more functional.

Tapping is the process of cutting and forming threads, and the die-process is better understood as threading. 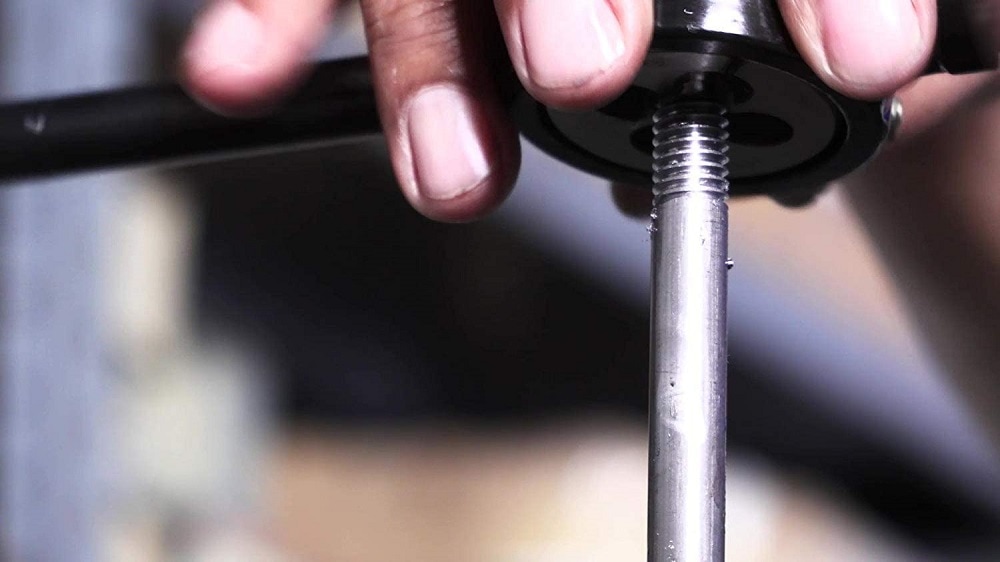 For following our how to use tap and die set instructions in this article. First here’s what you need to get ready.

A tap cuts or forms a thread on the inside surface of a drilled hole, creating what’s known as a female thread on the surface that functions like a nut.

Taps allow internal threads in a hole, which allows bolts to be screwed into it. For tapping, you will need a tap wrench and tap. Lubricating the thread can also make the process easier when cutting the threads by hand.

For threading, dies are used for making external threads on a rod. For using a die, making a chamfer on the rod will make it easier for making an external thread. Use a vise for security and lubrication when necessary.

Cutting fluid can help to make the tapping and threading process much easier. A vise will be able to hold rods securely when threading.

What materials can you use a tap and die on?

Standard taps and dies, being made for metal, can break the wood when used for tapping and or threading.

When getting a tap and die for projects that involve wood, much sharper, stronger, and more durable taps and dies compared to the standard ones are recommended especially for softer materials like softwoods. Thread per inch: picking the size

Size of the tap (three types of tap)

In terms of the size of the tap, there are three main types of taps: the taper tap, the plug tap, and the bottoming tap. The taper tap has a visible and pronounced tapering of the cutting edges with a more gradual cutting action.

The bottoming tap, has 1 to 2 tapered cutting edges before the full cutting force is engaged and is the most aggressive compared to the first two. It is good for use after cutting the initial thread.

There are two types of die for sizing: round dies and hex dies. Round dies are made to fit in a T-handle, cutting new threads, which need a handle to be used.

Meanwhile, hex dies are used commonly used as a chaser to repair existing threads, not needing a handle, unlike the round die.

How to use the pitch gauge?

A pitch gauge has many small teeth, usually featuring a standard side and metric side.

For standard measuring, it measures the number of threads that can fit in an inch.

For metric, it measures the distance between peaks. To use a pitch gauge, put the teeth against the taps.

After making sure the pilot hole is the right size, it would be most helpful and efficient to lubricate the hole or rods in order to reduce the friction when rotating tap or die and to also aid in chip removal when cutting the thread.

There are different kinds of lubricants for different projects that involve different materials.

When creating the thread, have your tap wrench ready and on the right angle.

Proper technique is needed when using the tap and tap wrench when creating a thread so as not to break any of the thread along the way by using a backward motion as you go to break the metal filings up.

Using a flute can provide clearance for the hole. There can be metal chips that need to be blown out of the hole, you can clean up the chips with a brush, vacuum, or blower. Lastly, check that all threads work with your desired nut or screw.

To use a die for threading for making external threads, prepare the rod by creating a chamfer on the end of a metal rod first [1] so it is easier to turn the die on the rod and get it started. Then, secure the rod by clamping it with a vise.

They must stay on the level and must have proper lubrication.

When turning the die a full clockwise turn, make a half counter-clockwise turn in order to break up the chips it produces so as to avoid damage.

Clean up the chips with an old toothbrush. Check if it works with the desired nut or screw.

How to use a tap and die set to repair a thread?

Using tap and die to repair a thread or rethread a hole or rod is very similar to making a new one.

When your stainless steel bolt or nut develops rust, you can still sand it clean, and still rethread it.

To repair a thread or rethread a hole with a tap and die set, spray cutting oil or lubricant on the tap, turn the tap clockwise around three times, and back it out once clockwise to let out the metal chips so it does not jam or break the tap that is being used.

Make sure that the tap is as perpendicular as possible to keep it even when penetrating the hole, making a new thread over the top of the old one.

Check with your former nut or bolt to see if it fits or if something is loose and faulty. Sometimes you have to step down to a smaller threaded rod or step up to a wider hole size for a nut. Dos and don’ts for using a tap and die

Now that you know what a tap and die set is and how to use it, here are more tips and tricks:

Time to make your own threads

Taps and dies are great and strong tools for tapping and threading, typically for projects that involve metals and sometimes wood.

They can be used for making your project more functional and complex or easier to work with due to your new ability to connect metal.

Taps are used for making threaded holes in materials while dies are used for adding threads to rods. Together, they can match and attach to each other. How helpful was my guide?

My name is Aaron, and thank you for reading my article. As a qualified builder, I share some tips here at Bangingtoolbox to help provide accurate DIY information on the internet.