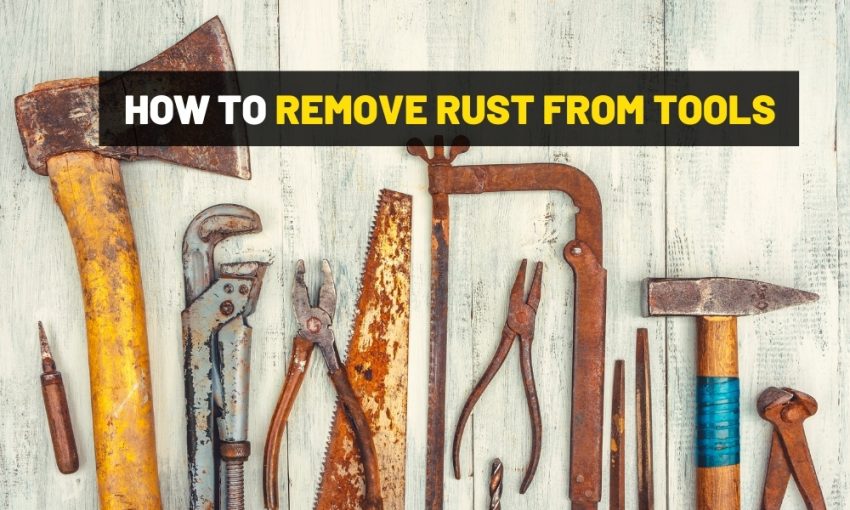 If you’re familiar with the term “falling from grace”, then know that it’s not only applicable to people and civilizations but also your tools. With enough time and neglect, once proud and shiny tools can end up as orange shadows of their former selves – the time they’ve spent either cooped up or left in some forgotten corner of the garage has allowed them to oxidize and rust.

When a tool rusts, it either becomes too encumbered to be used or just downright transforms into a pick-me-up health hazard.

If you’re in the need of rust removal and prevention, then you’re in the right place! Continue reading on to find out how to remove rust from garden tools, hand tools, and keep power tools rust-free, always looking spiky and span and ready to operate.

Table of contents +
When do tools become rusty?
Different methods to remove rust from tools
1. Using baking soda
2. Using vinegar
3. Using oxalic acid
4. Sanding
5. Using citric acid
How to get critical movement back on tools?
How to prevent hand tools from rusting?
Rust: What is rust and how does it form?
Tools that are prone to rust
Conclusion
Find even more tips:

When do tools become rusty?

Rust forms when metal directly comes into contact with water or when moisture from the air builds up on untreated metallic surfaces.

Much like food, you’d want your tools kept in a cool and dry place, away from hot temperatures and moisture.

The reason behind this is because metals tend to absorb less heat and end up colder than their environment, allowing moisture to build up and condense on their surface, eventually leading to rust.

That’s why storing tools in low temperate and damp locations tend to corrode quicker. Take gardening tools for example; regularly watering your plants makes the soil moist and if you don’t get the moist soil off your trowel, it’s bound to get rusty. We don’t know how many times baking soda has been mentioned in home remedies, but this versatile ingredient is just as handy when it comes to removing rust as it is in a batter of pancake mix.

Baking soda, when mixed with water, has abrasive properties [1] that simply eat away at rust as a concentrated alkaline solution.

Vinegar might be a great flavoring agent on your fish and chips, but the presence of acetic acid in vinegar also makes it a decent rust remover.

If you’re wondering how to remove rust from tools with vinegar, it is a simple and inexpensive alternative to using commercial rust removers. Just be sure to allow your tools to cure after if you don’t want them smelling sour. Oxalic acid is an inexpensive chemical that you can readily buy at your local hardware store.

Highly porous, it can easily get into hard-to-reach areas and turns even the most insoluble iron compounds into soluble ions, making it a great solution for how to remove rust from old tools with moving parts.

However, be careful when using this substance because it’s toxic and can cause skin irritation [2].

This is perhaps the most tedious of home remedies and is to be treated as a last resort in the event that you just don’t have any of the above-mentioned items at home.

Yet, even without the aid of chemical reactions, sanding is a surprisingly effective way on how to remove rust from tools fast while cleaning large build-ups of rust quickly. 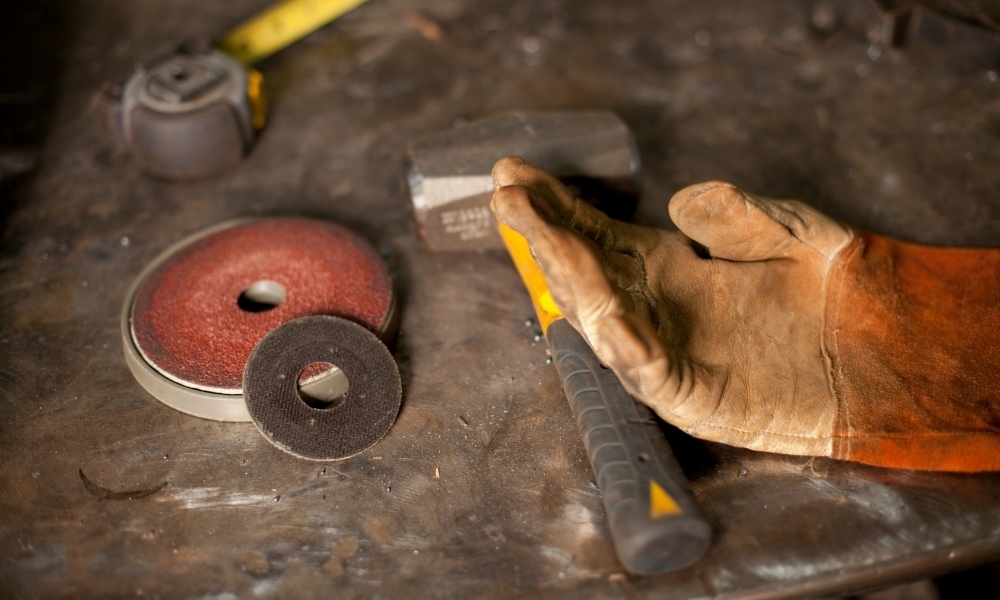 Citric acid is a safer and easier alternative to oxalic acid.

It’s milder, less abrasive, and weaker than oxalic acid, but is great at removing rust without damaging the steel finish.

How to get critical movement back on tools?

Advanced hand tools with more moving components suffer more from rusting as just even a single rusted part can cause them to completely cease function.

As an example, locking pliers have parts that allow you to adjust the size of their grip as well as have a mechanism that clamps the jaw to an object. These parts must move together for the tool to function.

Rust that forms and accumulates on any of the locking plier’s moving parts can cause it to cease.

You can use CRC lubricants and rust-removing silicone sprays to easily restore ceased and rusted tools.

How to prevent hand tools from rusting?

You might have heard that stainless steel doesn’t rust. While stainless steel is highly resistant to rust, the notion that it will never corrode isn’t entirely true. Given enough time and exposure to the elements, even stainless steel begins to degrade.

The only real way to prevent hand tools from rusting is to properly store and care for them. Place your tools in a cool and dry place or put desiccant inside your toolbox or rolling tool bag to absorb excess moisture.

Silicone spray helps add a protective layer between metal and air, guarding against rapid oxidation. Always fully wipe your tools after use, especially if you’ve worked with water, and give them a light spray with silicone spray.

Rust: What is rust and how does it form?

Rust is that unsightly reddish-brown flaky coating that forms on metal surfaces as a result of a chemical reaction.

Rust isn’t like fungi that spread once it forms. Rather, rust is a kind of corrosion that occurs when elements like iron in metal interact with oxygen either by getting wet or by being exposed to air moisture.

The most common type of rust is called ferrous oxide. Other elements such as copper and zinc can also oxidize, not necessarily forming rust, but can result in gradual color change.

A good example of this is the Statue of Liberty which was originally brown since it was made from copper but is now bluish-green because of oxidation.

Rust is more than just a blemish on metal. Rust is usually indicative of structural flaws within a metal’s overall structure, making it weaker and more likely to fail. All the more important to have these removed as fast as possible.

Tools that are prone to rust

Basically, as long as a tool is made of metal, it’s prone to rust.

Outside of chemically treating metal to be highly resistant against corrosion (E.G galvanization, powder coating, etc.), which can be rather costly.

The next best thing to do is to know which tools are more prone to rusting so as to be able to take the necessary precautions to avoid it and increase your tools’ lifespan. 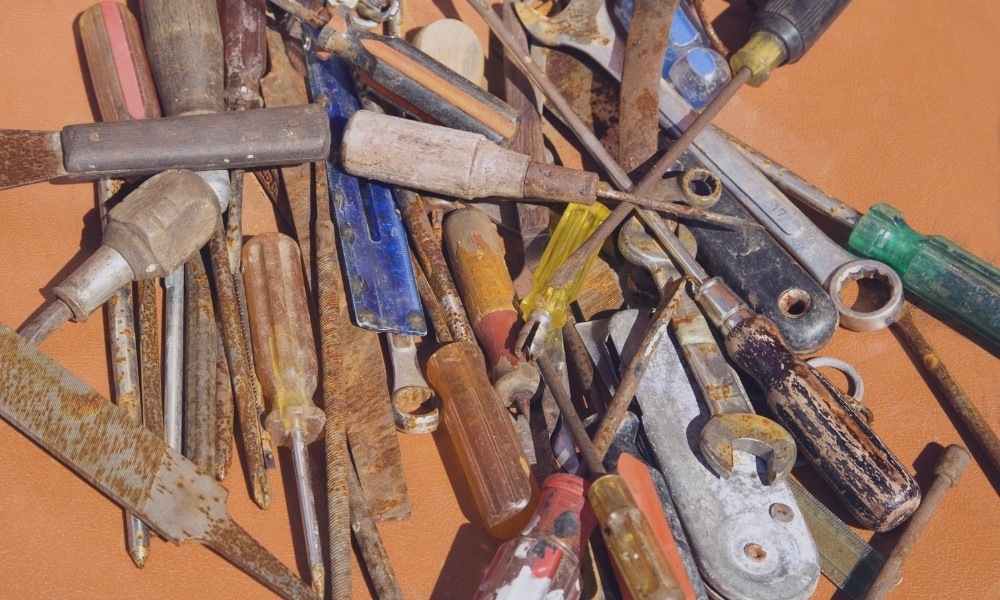 Rust is a very persistent problem that some tool owners constantly fight against. While there’s no surefire way to completely stop rusting, there are several easy steps that you can take in order to prevent and remove it.

Remember that rust also affects the integrity of your tools, shortening their lifespan and greatly lowering their viability. Thankfully, with the available home remedies we discussed, you can remove rust as easily as it formed. The best part is that it costs you near to nothing and takes just a short amount of time to complete.

Metal tools work best when dry, so be sure to store them in cool and dry places, especially if you live somewhere hot. Rust is pesky, but it’s not unavoidable. Do your homework, keep a towel handy, and always focus when working with your tools; that way, you don’t get… rusty. See you in the next one!