Applied angle-measuring has been around since the Babylonian era and is a daily task in construction and geographical mapping. Mathematical purposes and beyond, the 45-degree angle has distinguished itself from most other angle measurements by being the most common angle that needs to be cut, shaped, or built.

This guide is all about teaching you various methods of measuring 45-degree angles for your projects.

How do I measure a 45-degree angle?

Called a ‘Miter Cut’, it’s the process of cutting 2 parts that can be joined using a 45-degree angle to form a 90-degree edge. Wood and metal can both be mitered and can be done with either hand or power tools. Using a hand tool to miter is more accurate while using a power tool is faster and more convenient.

Regardless of tool type and material, to begin your miter, all you need is a marker and any ruled equipment that measures angles and straight lines.

Measuring tools you’ll need to mark out a 45° angle

You can measure a miter using measuring squares such as a combination square or layout square. Alternatively, you can also use straight rulers and triangles but will require more control and precision.

Keep in mind that a 45-degree angle is simply the half-point of a 90-degree one, so without a protractor, the best way to draw out a 45-degree miter is by connecting the corners of a measured square.

It’s easier to measure miters on flat, 4-sided materials, but can also be done on circular ones such as with pipes and tubing; although having a miter-box-saw will make this a lot easier.

How to cut other angles

Cutting a 45-degree angle is relatively easy as almost all squares have 90-degree and 45-degree markers. For cutting angles other than 90-degree or 45 degrees, it’s better to use instruments such as protractors and sliding bevels.

Sliding bevels are used to transfer an angle from a protractor to your piece to be cut or marked as they are adjusted to save any type of angle to be transferred.

A protractor is a simple and basic tool that allows you to measure 0 – 180 degrees but requires the help of other tools to perform and transfer the measurements.

Sliding bevels, like the T-bevel and T-bevel setter, allow you to easily mark, set, adjust, and transfer angle measures between 2 pieces of material.

Other tools that can more quickly give you an angle are a roofing square. A large 90-degree square with marks to give you the most common angles.

A Digital angle finder is another alternative but if we’re serious it would be better to use a 2-in-one roofing square and protractor. The best tools to cut miters in wood

Miter saw. As the name implies, the miter saw specializes in cross-cutting wood and allows you to easily make 45-degree cuts for a variety of projects.  In an instant, set the tool up and make any angled or beveled cut you set on the tool.

Table saw. Is easy to control when you know-how, a table saw is excellent for straight-line cutting which also makes it good for ripping a miter along a long length due to the ability to set the blade angle you want.

Band saw. The bandsaw’s flat blade allows it to cut in curves and circles, but also fits for cutting a 90-degree angle, with the right guide helpful for taller pieces that might outsize your table saw.

Hand saw. The timeless and portable hand saw is a good choice for miter cutting, especially for DIY’ers and smaller projects as it doesn’t require a power tool. However, it can be hard to get a perfect cut.

Miter box saw. Though it doesn’t cut timber as fast as a miter saw, a miter box saw allows you to set and cut angles by hand with a high degree of accuracy. A miter box saw can do a miter cut and it removes the manual measuring process. A miter box saw is especially good for cutting angles on pipes, or small bits of metal with a fine-toothed blade. 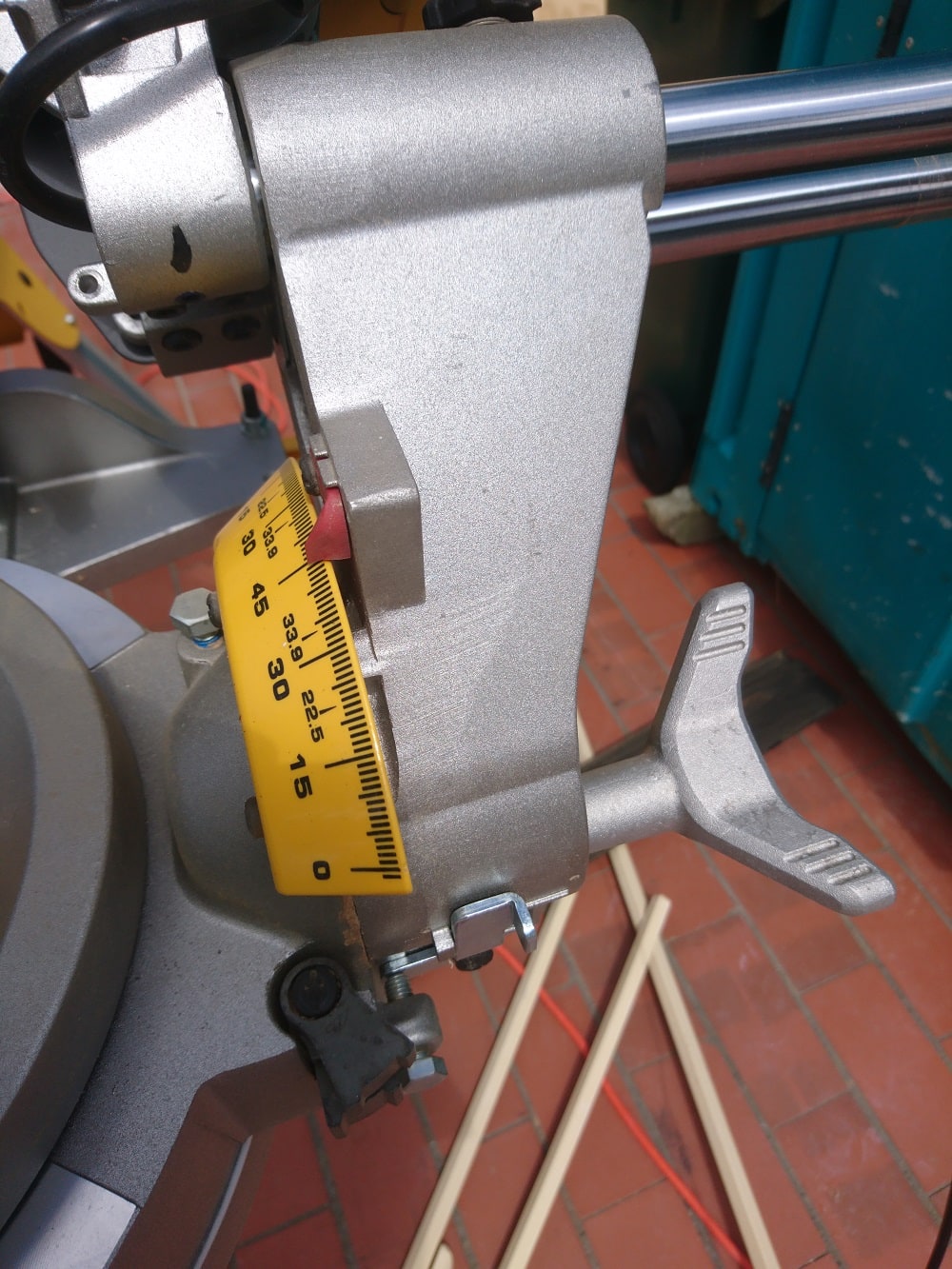 The best tools to cut miters in metal

You can also cut miters in metal. Here are the tools used on how to measure and cut a 45-degree angle cut in metal.

Cold saw/ chop saw. The cold saw is an advanced power saw that makes use of a coolant to reduce friction in order to arrive at cleaner cuts; ideal for metalwork and fabrication.  Alternatively, an abrasive saw is almost the same but instead of coolant, an abrasive wheel wears away as it takes the heat of the cut.

Reciprocating saw. Also called a ‘Demolition Saw’, a reciprocating saw is a versatile power tool that can fit an assortment of cutting blades and works well with both thin and thick metals. You can cut an angle with a one-handed or two-handed reciprocating saw but expect it to be a ruff cut.

Hack saw. A hack saw is basically a hand saw but for metal; it has finer teeth and is the original metal cutting tool. Ideal for small and lighter projects. As the blade is supported on both sides you can cut an accurate miter in metal, like aluminum, or steel pipe, unlike a reciprocating saw.

Torch kit. A torch kit like the Victor portable torch kit  is an oxy-acetylene torch kit that can cut through otherwise impossibly thick metal where traditional saw blades would likely break. Requires skill and usual deburring to smoothen out cut edges.

Of course, when it comes to building there are so many different types of saws. 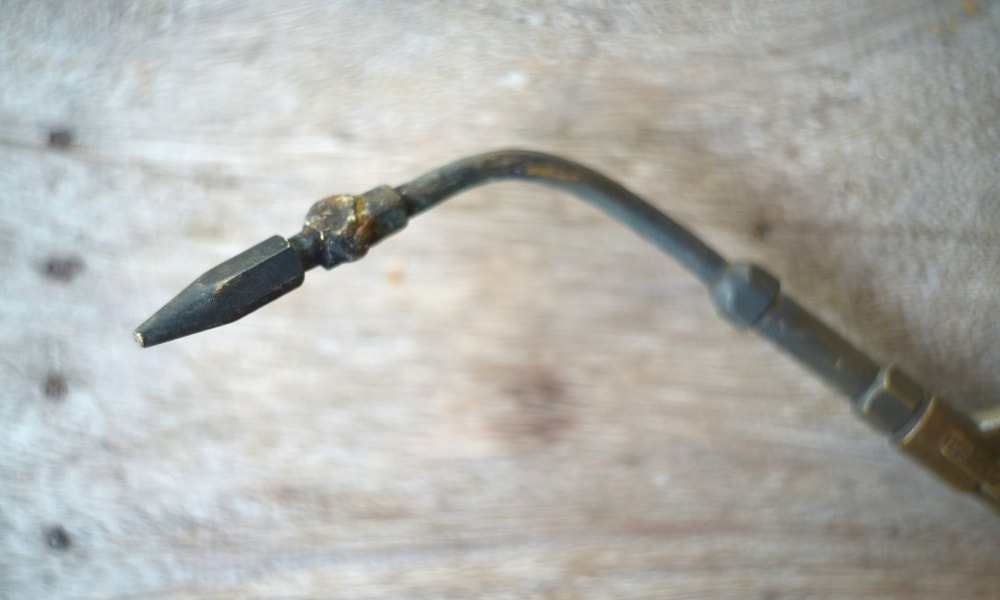 How to cut an angle with a hand saw?

Cutting an angle with a hand saw doesn’t really differ much from cutting at a flat surface – it really only involves a little bit more finesse and technique, plus the fact that you have to simply mark where you want to miter.

Dovetails and Tenon saws are more specialized hand saws for woodworking and cross-cutting.

For woodworking miters, these saws are known to give a better result if used correctly. Unlike a standard hand saw that has bigger teeth, made for faster cutting they do a  ruffer cut. 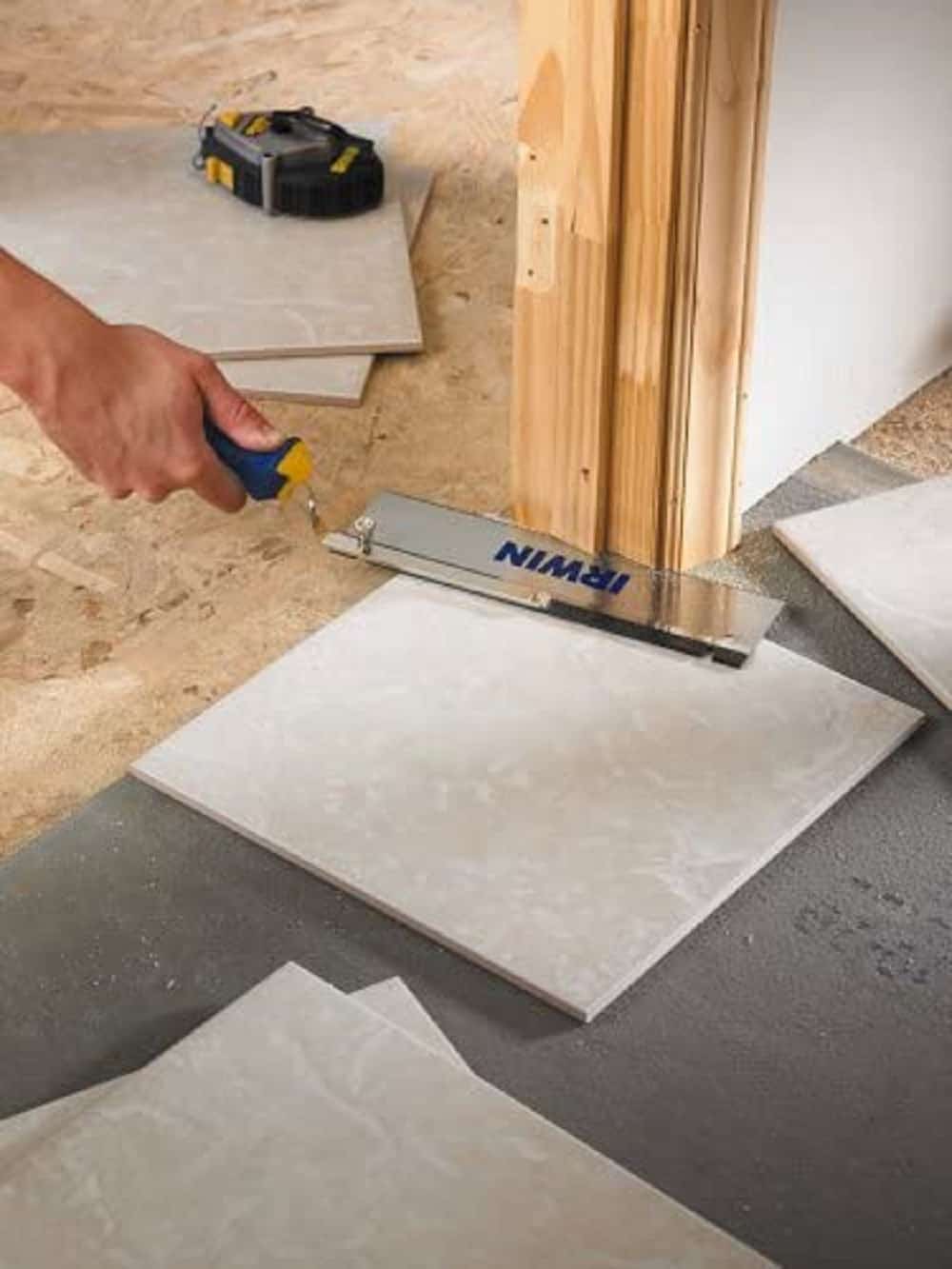 How to cut angle with a miter box?

A miter box allows you to cut straight and perform correctly angled cuts. Using a dedicated miter box saw, you can get close to the same results of a miter saw with only a hand saw. Think of a miter box as a tracing guide for your saw – it gives you the layout and you need but only follows the motion for cutting. To cut 45-degree angles using a miter box, follow these simple steps: 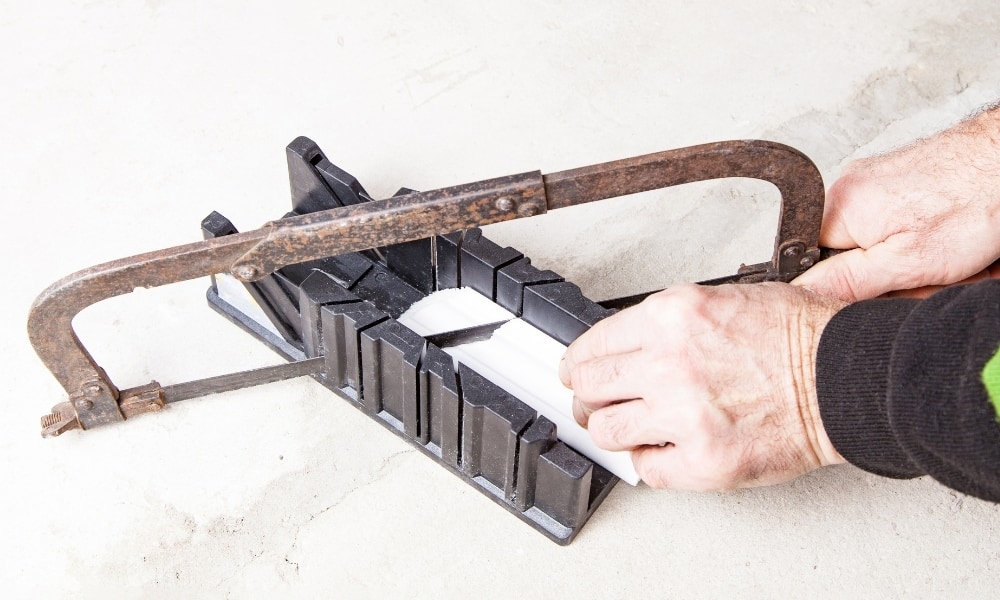 How to cut a 45-degree angle with a circular saw?

A circular saw makes cutting angles a bit more convenient. All you’d need is your circular saw, a speed square, and a marker. With a circular saw, you can perform varying angled cuts.

Using a roofing square as a guide

Align the blade with the cutting line and make sure to slide the square up to the saw’s base, and use a clamp to secure your square as a guide.

Do not lift or tilt the saw upon nearing the edge to avoid waviness.


Align your circular saw’s base plate with the cutting line and begin the cut; trace along at your desired angled bevel.

How to cut an angle with a miter saw?

A miter saw is perhaps the best miter-cutting tool you can have as it has all the necessary utilities to make the perfect angled cut. To achieve this, you simply need to calibrate it 1st before making your cuts; and here’s how:

If you want to know all the differences between a miter saw and a circular saw you can find out more here. How to cut an angle with an angle grinder?

Though generally better for grinding, angle grinders can also be used to cut. Because it’s more of a maneuverable and light power tool as compared to most metal cutting alternatives.

By creating a jig for the tool, you can transform it into a mini-miter saw for metal and use it in conjunction with squares and triangle guides to make angled cuts in metal. You might need to use it to smoothen out the edges afterward.

So you want to know how to measure and cut a 45-degree angle on trim with a miter saw? You might not always notice angled cuts in your furniture or building but they are everywhere. 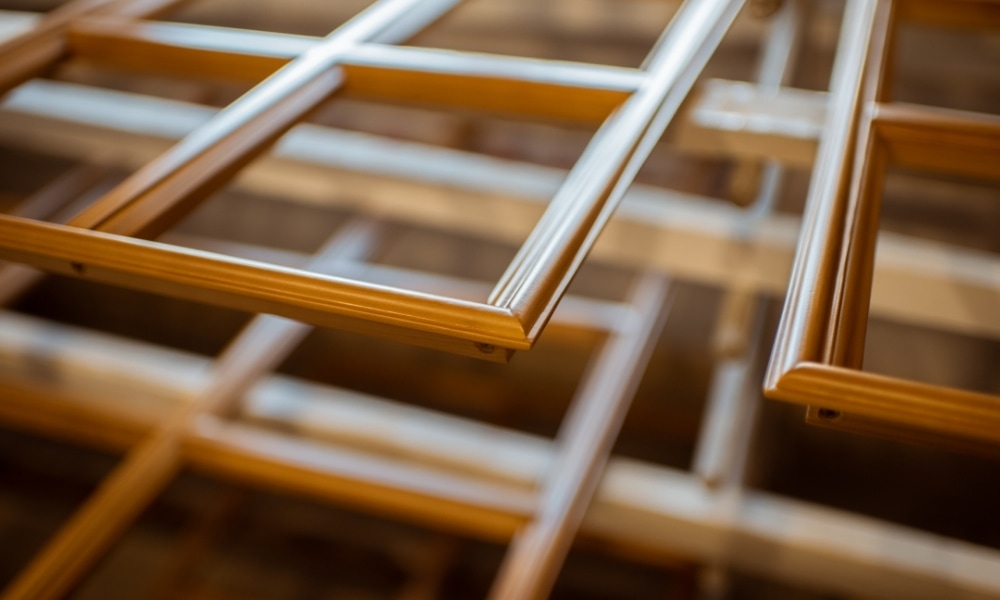 There are many ways and tools to make angled cuts and miters; whether you make use of hand tools or powered ones, what’s most important is to make sure that you cut 45 degrees accurately for a tight-connection.

A miter saw, amongst all saw types, is the best at making angled cuts as its very design is centered around doing work that involves fast accurate miter cuts – it takes away the tediousness of measuring and allows you to adjust angles on the fly.

Want to know how to make the most out of your woodworking projects? Here’s how you can make money on woodworking. 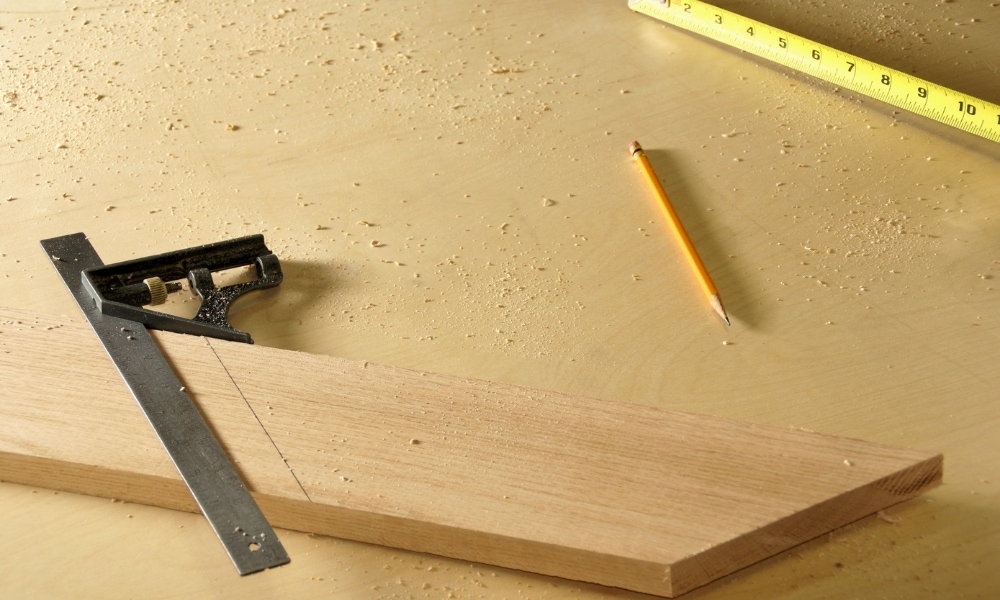