Our tradies are reader-supported, approved purchases may earn a small commission. Learn more. Fact checked by our Carpenter Aaron

When it comes to reciprocating saws, both cordless and corded have their pros and cons for different jobs. For big jobs, a corded Sawzall will let you take out an entire wall in only a few hours.

Meanwhile, a cordless version will let you more comfortably take outdoors, windows, and parts of wall framing on your renovating projects.

Whether you opt for a Dewalt 10 amp reciprocating saw or the Makita cordless Sawzall, the choice comes down to the size of the most regular jobs you intend to do.

The corded option can do everything, but so can a cordless one with more time. For power and cordless operation, the Makita XRJ06PT is the best option. 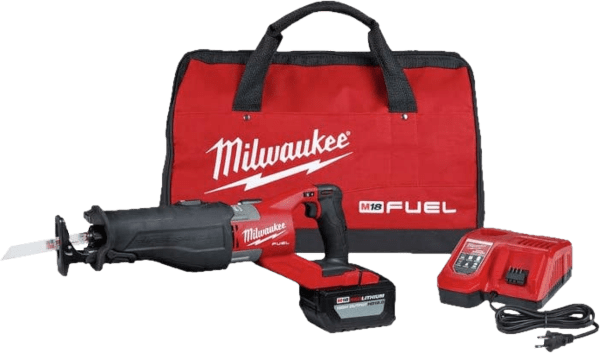 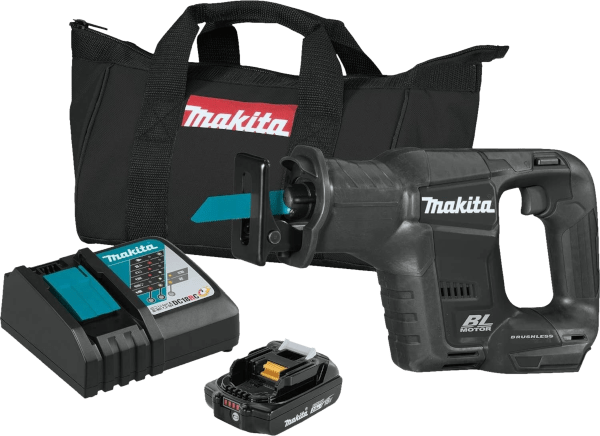 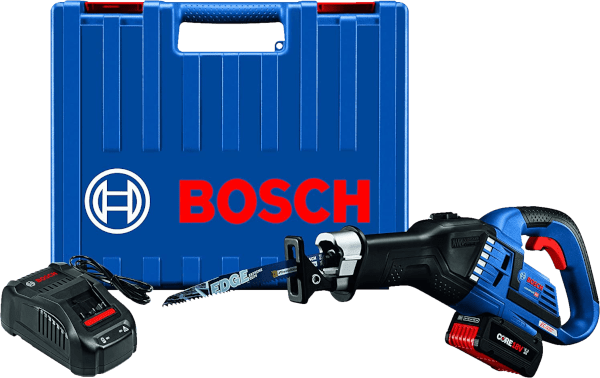 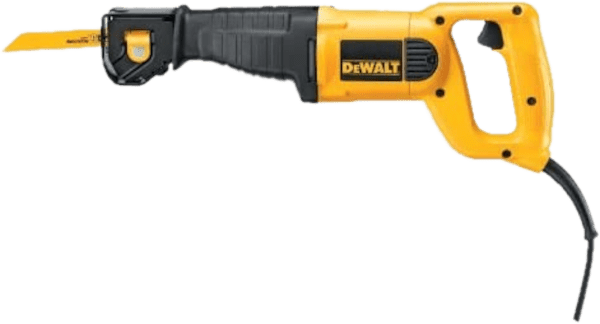 A heaven-send for plumbers, it allowed them to easily make cuts in tight corners for demolition work.

When Milwaukee introduced the Sawzall [1] in 1951, they set what would be the standards for all reciprocating saws to come.

Not much has changed with the reciprocating saws in the last 5 decades except the improvement of portability and cordless technology.

Though it’s not a tool that everyone fancies, many professional construction workers and even rescue workers call it essential.

Whether you’re building a house (or tearing one down), fabricating workpieces, or just plain looking for something to gift a tool-savvy friend or relative, consider getting them one of these.

Crude-looking and multi-purpose, but totally reliable, this guide will let you peek at the best reciprocating saw. Features to consider when buying a reciprocating saw

Reasons to buy a reciprocating saw

Reciprocating saws can be used on a number of tasks. It’s a tool that is primarily used in construction, but also has applications in gardening, such as pruning, and even in the food industry – used as a tool in processing meat and bone.

Reciprocating saws are both mechanically powered and precise. Not only do they offer faster completion rates, but also allow you to perform more calculated work.

Reciprocating saws are powerful, but still small and light enough to be portable. No need to go back and forth in order to complete jobs because you can practically carry them with you wherever and whenever.

Things to check before buying a reciprocating saw

The prestige and track record of a particular brand will already tell loads about the potential performance of a tool.

Milwaukee, the pioneer, and other big names like DeWalt and Makita, all have the experience and expertise to ensure the delivery of proven quality products time and time again.

Perhaps one of the most, if not the most, important components of the saw is its blades.

When checking for durability, consider that of the tool and the blade. You’d want the tool and its teeth to last you a long time, as both are expensive.

Look at customer and professional reviews before purchasing to lessen the risk of getting a model whose motor easily clunks out and/or which blades can break early.

4. Think about the price.

Just because some reciprocating saws are more expensive than others, doesn’t mean that they’re automatically better.

When factoring in price, consider what you’ll use it for and how often.

It’s better to invest in a tool that you’ll use for the long-term, otherwise, get the lower-priced models for one-off uses.

They are generally larger and stronger but do tend to cut more roughly.

Given the heavy-duty nature of their applications, corded saws are more suited for demolition work and are less safe and practical for beginners.

Cordless reciprocating saws have decent power, are more accurate and portable, and are generally safer. They are light and can be handled with fair ease even by untrained hands.

They’re ideal for small jobs, given their compactness and limited power.

An exception to this is Makita’s line of 2-battery models who experience the best of both worlds – longer run time with 2 battery packs and almost the same amount of power as corded models thanks to Makita-brand engineering and design.

Brushed motors were a big thing at least back in the 1800s. Brushless motors have since then gained increasing popularity, especially as alternative engines for power tools.

Both basically make use of components called rotators and magnets that harness electricity and convert it into mechanical energy.

If you’re wondering about the motor type, go with a more efficient brushless motor over an older outdated brushed one. 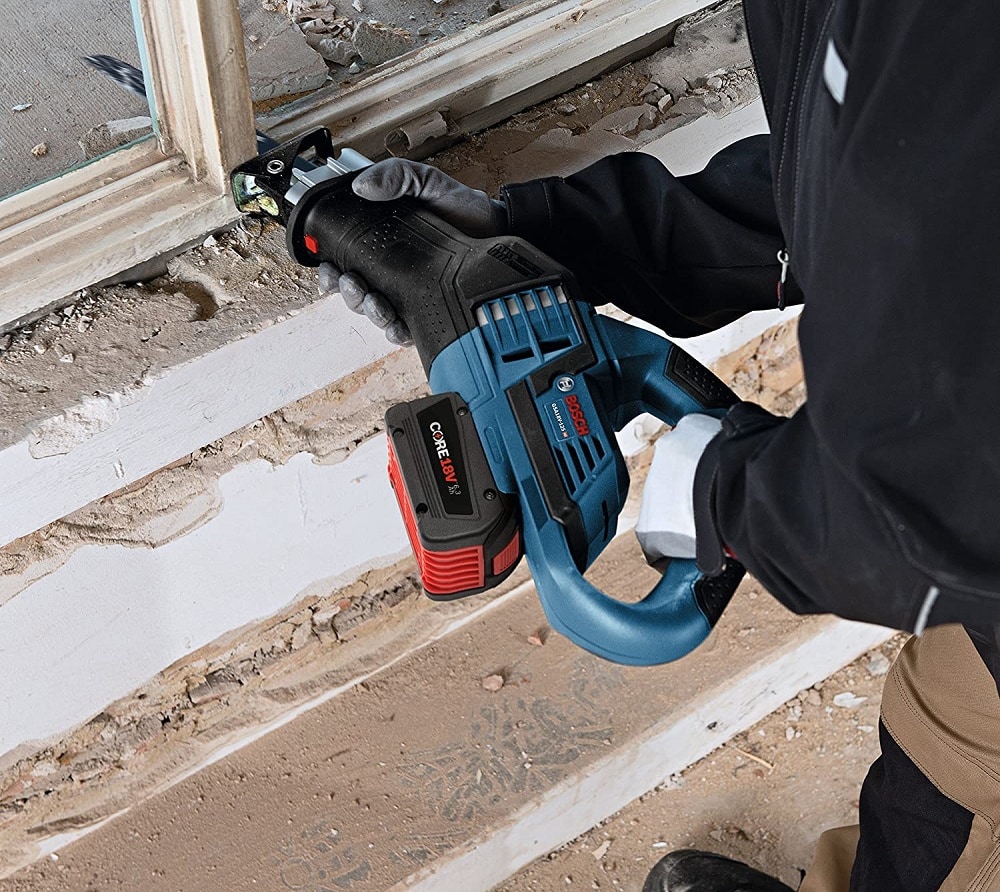 While there is a place for one-handed reciprocating saws, you’d generally want to go with the conventional or two-handed ones. You just can’t get as much out of smaller saws; while you can work with more control and accuracy, scope and durability are diminished.

Two-handed saws are more robust and have more rigidly constructed blades. While they’re a tad bit heavier, they can take on a variety of jobs with minimal effort and can be just as easily controlled with proper positioning.

Where are reciprocating saws mostly used?

Reciprocating saws are also affectionately called ‘precision demolition saws’. They are great for renovating and/or demolition-type jobs where they can easily make precision cuts to take out unwanted pieces of material, wood, and metal, and alike. Use it for:

With that being said, reciprocating saws are most commonly used in jobs that involve construction and interiors. Builders, carpenters, and woodworkers all make use of the tool fairly common as well, with some even using it to trim tree branches.

However, consider other tools for cutting rebar.

What blades to use and when?

Reciprocating saw blades usually vary in length anywhere from 6” to 12” and have different appearances as well as teeth orientation.

Each blade is designed to work optimally on specific materials and produce different results, with some being more polished than others.

Thicker blades are sturdier but less flexible. In some cases, flexibility offers a smoother cut but tends to falter with thicker and denser material.

Familiarize yourself with these standard blade thicknesses.

What determines the grade of application is usually material thickness and density, so refer to the thicknesses depending on the composition of materials you are to work with.

It’s a good idea to have at least 2 to 3 types of blades with you in order to really work with a wide array of materials.

A saw blade’s lifespan is greatly affected by stress and frequency of use. Ideally, a quality blade, given the premise of heavy and daily use, should last you about 3 months before it begins to dull or break.

Depending on how well you use the tool and how well you take care of the blades, some can last you for years! The Makita XRJ06PT is hands down the best cordless reciprocating saw. With two 18V lithium-ion batteries, you get twice the amount of power and performance.

Its brushless motor further lengthens runtime by up to 50% and its crank mechanism reduces vibration and blade deflection, allowing for deep, smooth cuts even with heavier applications.

The 1 ¼” stroke length gives you fast and efficient cutting and, coupled with its tool-less blade change, really makes it a versatile tool.

With a patented computer control system, not only does it have efficient power management, but also offers up to 3x faster charging with auto-overcharge prevention. 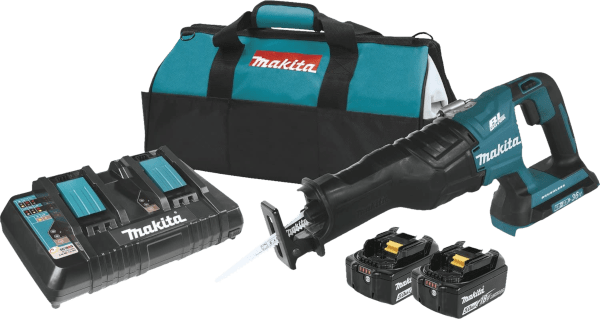 Its variable 2-speed brushless motor gives it considerable and lasting performance, able to reach an astonishing rate of up to 3,000 strokes per minute (SPM)!

It’s a lighter and more compact alternative to the Makita XRJ06PT, weighing in at only 8.2lbs with a fully charged battery.

While this Makita Sawzall may lose out to its more expensive brother in terms of up-time, but performance-wise it holds its own for small jobs.

When it comes to being the best corded reciprocating saw, the DeWalt DWE305 stands on top.

It’s perfect for heavy-duty applications given its ample motor chugging out 12 amps of power. Its 4-position blade clamp lets you flush cut with ease and allows for some nice versatility.

The 1 ⅛” stroke length allows for some clean and precise cuts, despite what may be a little heftiness of the tool.

The variable speed control trigger also allows you to work at your own pace and helps maintain the consistency of results. Robust DeWalt manufacturing lets you take on tougher materials with this saw. The Bosch RS428 is the best value-corded reciprocating saw. The thing that really stands out with this tool is the fact that it only weighs 8lbs despite having an insanely powerful 14-amp motor.

It’s outfitted with a vibration control system to allow for efficient and controlled work.

With its raw power, you can literally go down on any material you see fit, just be sure to equip the right blade type to avoid overbearing on it with the motor’s output.

If it’s affordability that you want, then look no further than the Black + Decker RS500. It has pretty much everything that you would need for a fully functional and work-ready reciprocating saw.

Variable speed, tool-free blade change, adequate power, and of course a nice price tag all make the RS500 a decent choice. It’ll get the job done for what it’s worth, just don’t go industrial-level with it.

What other tools should you consider instead?

Should you consider using other tools? That really depends on what job you’re taking on.

For demolition, no not really, a reciprocating saw will do you just fine. If you mainly want to engage in cutting, then perhaps try a skilsaw for straight and accurate cuts.

You can pair using reciprocating saws with other tools for especially large-scale demolitions, such as with a wrecking bar or Estwing hammer , for when you need a claw hammer to rip apart what you are cutting.

While these saws make quick work of wood and nails, packed and dense materials such as bolts are not so easy.

Combo this with an alternative metal cutting tool that can cut bolts for demolition work faster, like a Makita 18V angle grinder .

Finally, if you’re looking into cutting a variety of tree and branch cutting and trimming jobs, you may opt for a Makita cordless chainsaw.

Tips for using a reciprocating saw

If you want the best cordless saw, get the Makita XRJ06PT. It has the power and lifespan to get you through most jobs.

A bit pricey, but it nets you a well-engineered and efficient tool.

A good alternative to it is the Makita XRJ05Z, which is basically a lighter, single-battery version that shares the same tool-free blade change and stroke-length.

For best-corded saw, the DeWalt DWE305 is undisputed, one with its powerful motor and durable manufacturing.

The Bosch RS428 nets the best value, mainly for its lightness and versatility thanks to an extremely powerful motor.

If you’re looking for a decent enough tool that gets the job done without having to throw a great deal of money, then the Black + Decker RS500 is your best bet. It’s not great, but it works. And those are the best reciprocating saws.