We’ve all been there before, a nasty pool of shower water unwilling to go down the drain causing a mess.

Worse of all, it can leave a damp feeling and an unpleasant smell that can attract pests, mold, and bacteria.

Indeed, clogged drains can make our time in the bathroom a bit of a toe drowning nightmare.

Thankfully, clogged shower drains can easily be taken care of with a few simple DIY remedies using simple tools without the need to call a plumber most times.

So if you still don’t know how to unclog a shower drain with standing water, keep reading. Shower products such as soaps and shampoo can have grease or fat in them which combines with minerals in the water to form solid clumps.

These clumps mixed with hair can block out the holes of your shower catchment filter under the drain.

Too much build-up can rust your shower drain even if it’s stainless steel. People usually lose 50-100 strands of hair per day so it’s no surprise that it can clog your shower drain.

Hair is also greasy which means that it can form clumps in water. Bits and pieces of your clothes can rub off on your skin and can accumulate on your shower drain whenever you take a bath. Washing your clothes in the shower also contributes to lint buildup.

The stuff you wash off from your body while showering can simply overwhelm your shower drain given enough time.

You can check whether or not your drain is clogged in many ways by simply looking at it and doing a flood test.

Just pour a large amount of water on the shower floor and see how long it takes for it to drain, the water should drain faster than a puddle can form. Signs and symptoms that your shower drain is clogged

A clogged shower drain will have a significant buildup of gunk blocking its holes. With a flood test, you would find that the water is not draining as well or not at all.

Some shower drains, especially point drains, include a removable cap and/or filter that collects residues and gunk for easy fast unclogging of the shower drain at this point. What are the methods of removing clogs from shower drain?

Remove accessible buildup, in the S bend or filters.

The simplest and easiest to do without any tool. This involves clearing the buildup with your hands, by removing the filter and giving it a blast with the hose outside. Merely pouring hot water can remove soap scum and other soft materials that clog the drainage.

If a drain is blocked by hair hot water will not dissolve the hair, but it can dissolve the grime holding hair together in a knot causing the blockage of a shower drain.

Flowing hot water for a period of time is required.

A plunger is not only helpful for unclogging toilets but drains as well.

It mostly does it by forcing the blockage down and out the S bend in a drain.

A simple hook made out of any metal wire (like a coat hanger) can also do the trick. It’s cheap but less flexible (both literally and figuratively) compared to a snake. This one can be bought from hardware stores or rented.

It’s a flexible tool that goes down the drain to either pull out or break down a drain blockage.

If all else fails, strong (and toxic) chemical cleaners can be a sure-fire way of clearing even the most difficult of blockages. Just be careful when using them and wear gloves. First, remove the cap on the drain and remove what’s visible.

The first way to unclog hair from the shower drain is to remove it by hand.

Before going into the methods below, it’s best to try doing this first as it usually solves most clogging problems 99% of the time.

As we’ve said before, a lot of drains have a removable cap and/or a filter.

These are designed to collect gunk and hair buildup so you can easily remove them by hand. When to use this method?

This will soften the blockage and hopefully break it down.

Usually, this does not solve clogged drains on their own, but it can also make the succeeding methods easier.

What do you need?

How to use boiling water to unclog the shower drain?

Boil water in a pot and pour it into the drain. Be careful not to burn yourself from the hot steam and water splashes.

Hold the pot firmly so you don’t accidentally drop it. Repeat this process two or three more times.

One of the ways to unclog a shower drain is using vinegar and baking soda.

Both vinegar and baking soda are two easily available household items that you should always have in your home.

Combined, these two make a great general-purpose cleaning solution and a great way to unclog a shower drain without using any tools.

They are also effective in clearing out drain clogs without resorting to other chemicals because they are non-toxic and will never damage the plastic drain pipes in your home.

How to remove clogs from the shower drain with vinegar and baking soda?

Get one cup each of vinegar and baking soda. Pour the baking soda first into the drain followed by the vinegar.

The solution inside the drain will then start to bubble. Let it sit for a couple of hours then do a flood test to see if the problem goes away.

It’s an effective way to unclog the shower drain naturally.

A toilet plunger creates fast explosive pressure that can help break down blockages, or at the very least, pull the gunk closer so that it gets within reach for removal depending on your technique.

The effectiveness of a plunger depends on what kind of buildup is clogging the drain.

For example, if the blockage is mostly made out of hair, the plunger will struggle to create enough pressure.

You also don’t want to make the blockade worse by compressing it even more and making it deeper and harder to get to. 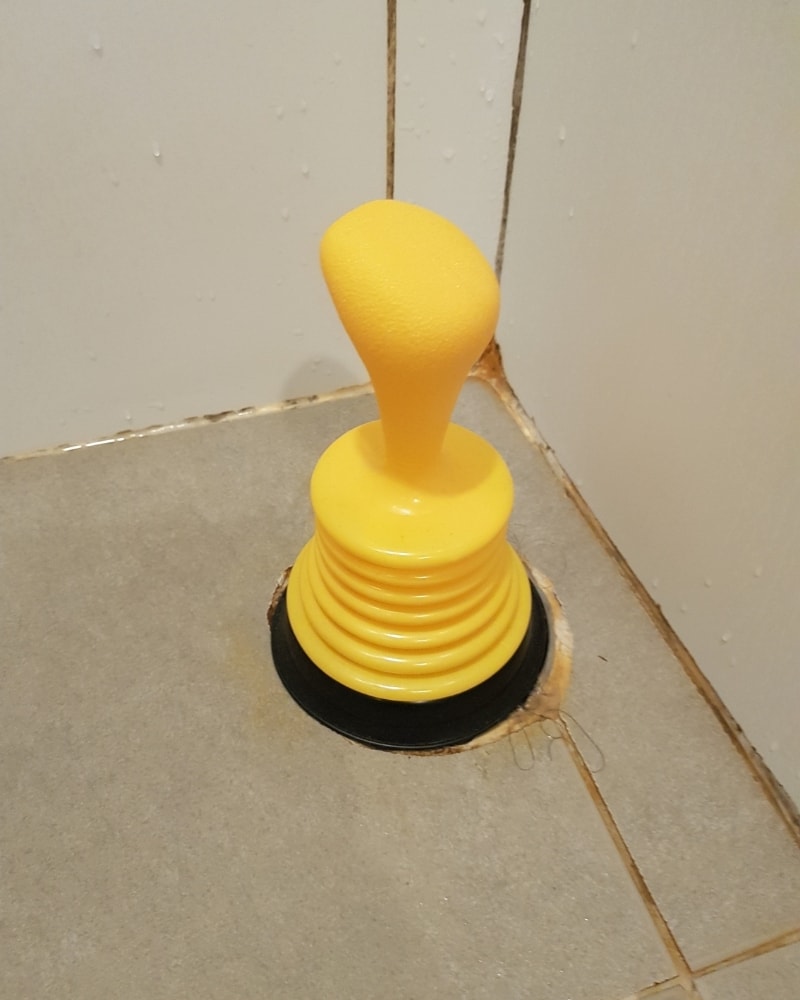 How to unclog a shower drain with the plunger?

If you need a tighter seal, you can smear on a layer of petroleum jelly or Vaseline at the bottom of the plunger’s rim. 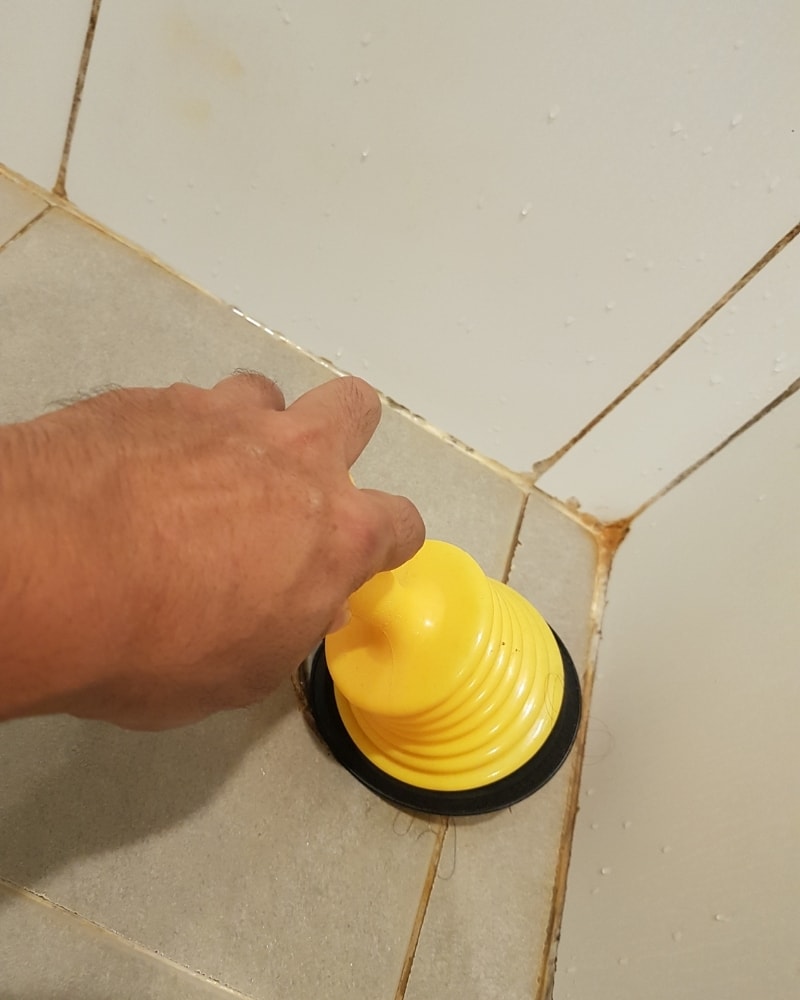 Remove clogs with a plumber’s snake

A plumber snake or drain snake is a flexible and retractable tool. It has a metal wire which can easily reach deep into a drain pipe no matter its shape.

When using a snake to unclog a shower drain, a hand crank is turned which extends and retracts the metal wire depending on the direction. This metal wire then either breaks up the blockage or pulls it out.

The best way to unclog a shower drain is by using a plumbers snake, if all else fails, it has a very high success rate but is mostly not needed for most clogs. How to use a plumber’s snake to remove clogs from the shower drain?

Can a coat hanger or hook remove blockages from the shower drain?

If you don’t have any of the tools available like a plumber’s snake, a metal hook can do the trick.

You can fashion an improvised one quickly with a metal wire hanger from your closet and a pair of needle-nose pliers.

All you have to do is straighten out the hanger but keep the hook on top.

At the opposite end of the hook, bend the wire to create a handle. You would then use this to fish out and clear the blockages in your shower drain.

If all else fails, dedicated liquid chemicals drain cleaners can be used. This method should only be used as a last resort because of the chemicals’ strong, toxic, and corrosive nature. Chemical drain cleaners typically use a very strong base or acid which can be hazardous to your health.

If you don’t know what to pour down the shower drain to unclog it, here are the chemicals to use: How to use chemicals to unclog a shower drain?

Remove the shower drain plug or cover and pour the chemical down the drain.

The amount should be specified on the bottle.

Wait for 30 minutes then flush with hot water. Test to see if the blockage has cleared.

How to unclog a shower drain with bleach?

Bleach can also be used instead of chemical cleaners. Depending on the type, bleach can either be oxidizing, acidic, or caustic.

Common chlorine bleach, however, is caustic. To use as a drain cleaner, pour bleach carefully into a cup then pour it down the drain. Wait for 15 minutes then flush with hot water.

Safety tips when dealing with chemicals How to avoid future clogs and blockages in the shower drain?

We know that this usually isn’t the preferred way to prevent future clogs, but it helps a lot and is practical.

As we’ve said earlier, every person sheds 50-100 strands of hair per day and is the most common culprit of a clogged shower drain.

If you are willing to, shaving your head will greatly prolong the time before you would need to unclog the drain again.

Use a filter system on the drain.

Some of the new drains usually come with some sort of filter system, but consider getting one if your drain doesn’t.

They are designed to collect hair and other culprits of clogged drains so that you can easily clean them out without the need for any of the methods above.

When to call for plumbing services?

If all the methods we’ve shared above don’t work or if your drains clog a bit too frequently, plumbers might need to take a look.

This usually happens when the drainage system in your home has major issues and blockages that cannot be simply solved by the usual methods.

Other signs that you might have to call in a plumber are:

Have you also got a stuck faucet handle? Click here.

DIY methods for unclogging shower drains can help you save time and money by not needing to call in a plumber every time clogs do happen.

Hot water is the best natural method to unclog a shower drain but it might not always work.

Hot water is a great and easy way to maintain a clean and healthy bathroom too by cleaning the drain that can have a build-up of mold and bacteria too.

Some maintenance and care done periodically can reduce the need for plumbing services and draining problems such as sink clogs or malfunctioning dishwashers.

Even though we’ve made this guide to help you avoid setting up a visit from a plumber, there will be times when you would need their services.

If the DIY methods above don’t do much to help, there might be a major problem only a plumber could fix. 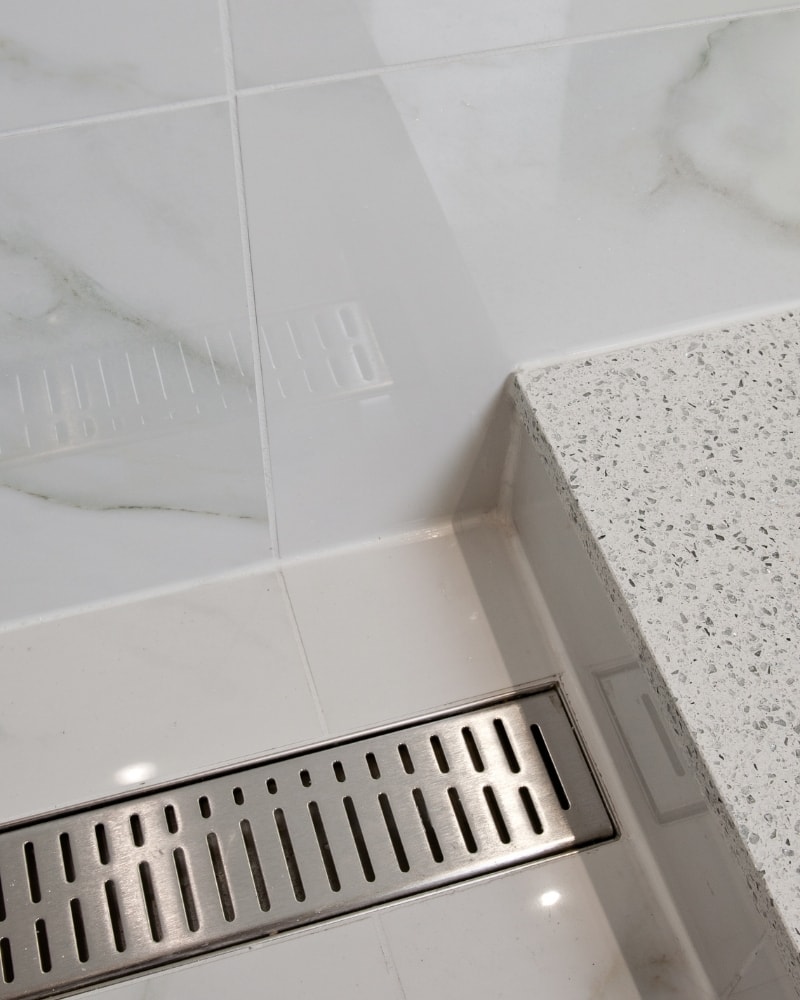 Hi, my name is Jessica, thank you for reading this article. I love to teach people about style and color when it comes to design and architecture.

As an architect and interior designer, my inspiration here at Bangingtoolbox is to provide and share helpful and unique ideas for small personal home and DIY projects.

If you want to ask me any questions about the crazy world of design and sustainable action in the construction industry you can find out more about me here.