Checked and updated on January 17, 2021 by Aaron Barnett 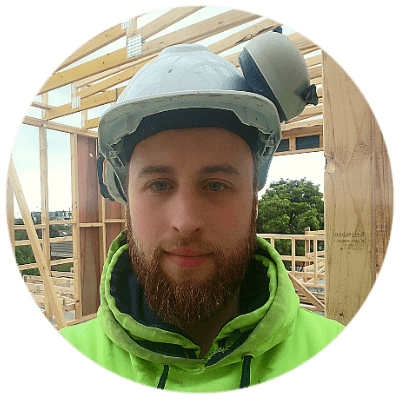 The best tin snips are good for cutting any edge of corrugated iron that is going to be seen, as they are easy to control when cutting. It is the most common way to cut galvanized, stainless steel, and plastic flashing’s.

You can generally get away with only 2 pairs, as most of the time you only need to cut around a corner from one side left or right. You can turn a pair of corner cuts upside down to make a cut in the other direction if you want. It is however sometimes better value just to get a set of three so you have a replacement pair aswell.

When using tin snips to cut thick metal, or if you are using low-quality metal snips, they might fail with the two blades starting to separate causing the snips to not cut as effectively.

Metal corrugated roofing can come in different gauge’s, most gauges can be cut with tin-snips easily, but slowly. And for this reason, there are other tools for cutting metal roofing such as metal shears or an  electric nibbler. 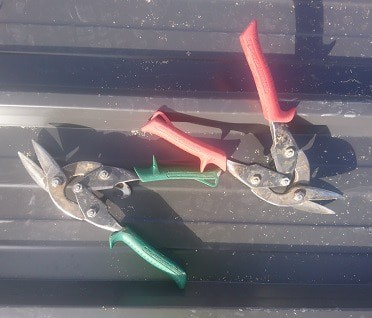 Electric metal shears, come in two varieties, a standard plug-in in power-tool, or better an attachment for your impact driver, this is best done with malco tools. Shears are a cheap tool that can quickly cut sheets of corrugated metal in straight lines with little effort.

Cutting metal roofing with a nibbler

A nibbler is the best way to cut metal roofing, a nibbler, unlike electric shares, a nibbler can be moved more easily to cut around corners quickly and easily without jamming.

An electric nibbler is what a professional roofer would use, it punches its way through the metal in a fast and tidy way to leave a clean-cut.  Nibblers cut metal roofing materials like butter.

Nibblers work great because they cut a decent amount of metal out with each punch so that the blade doesn’t jamb as shears and tin-snips can.

There are actually 4 different variations of a nibbler tool. Follow the link to find out what type to get and the best performing tool.

It is recommended to cut visible roofing edges half an inch longer and then tidying things up with a second cut with a good pair of tin-snips at the end. Can I use an Angle grinder to cut corrugated iron? Using an  electric angle grinder or a cordless grinder isn’t the recommended way to cut metal roofing. Metal roofing is thin enough for much safer and faster tools to do the job. Grinders can leave behind sparks that can burn the paint finish, and also leave a dangerous sharp cut edge. When ordering corrugated iron roofing make sure to let the supplier know what lengths are actually wanted. Order corrugated metal roofing at the length that you need. This will eliminate wastage and reduce the amount of cutting that would need to done.

Sometimes you are going to have to cut corrugated roofing yourself if you are recycling roofing material. Or if you have a roof angle that a factory won’t cut for you. Or when working around roof penetrations.

What is the best metal roofing gauge? Corrugated roofing comes in different gauges, the thinnest gauge is easier to cut with tin snips, but if someone walks on your roof it can dent easily. Corrugated roofing that has a thicker gauge isn’t that much more expensive, and worth it in my opinion. But requires a nibbler to cut, the thicker gauge.

With a stronger thicker gauge roofing iron you don’t have to worry so much about your getting dents if someone walks on the roof for maintenance. A nibbler will easily cut all gauges of roofing but like I said above tin snips really struggle on thicker gauges compared to a  nibbler. A galvanized steel roof has a zinc coating layer of protection only, the cut edges, therefore, are not protected around the sea. These roofs will quickly rust from the cut join up. This is especially true around the sea. Known as the “sea spray” area.

Zincalume and galvalume roofing are much the same except licensed in different country’s. They are a mix of aluminum and zinc through-out rather than just a zinc coating. This gives cut edges some protection against rusting.

A Galvalume roof is available corrugated, with many design types.

It lasts a long time while being cheaper than getting a zinc or copper roof installed. Although as mentioned above, it can expand and shrink a lot with heat.

A zinc roof costs more but has a very good life in areas close to the sea this means your roof can last a lot longer.

A zinc roof is generally installed with a series of trays and a cap.

A copper roof is the most expensive material to build a roof out of. Copper is extremely long-lasting even around the sea. It also looks very nice.

Although a copper roof will turn green after it ages for a few years, it is also bad for the marine environment, when the water run-off ends up in the sea via stormwater pipes.