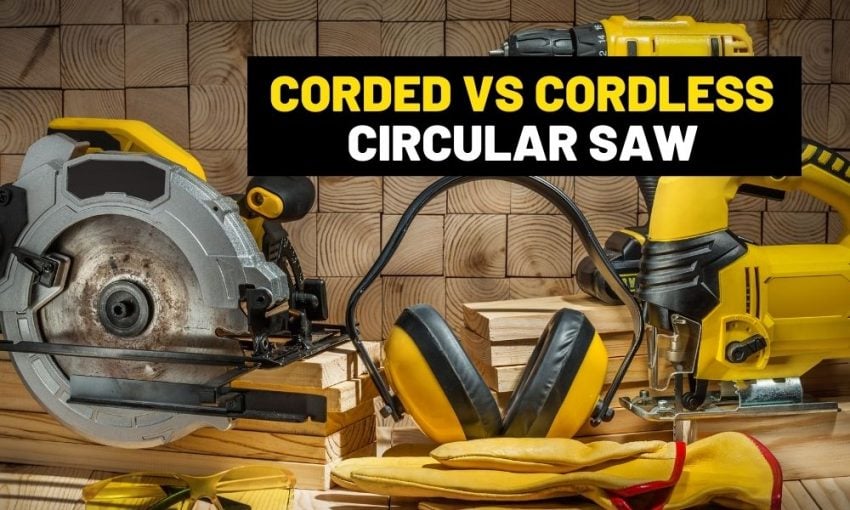 Available in two variants, corded and cordless, it can be rather difficult when it comes to choosing which exactly is the best for your particular needs.

Corded and cordless saws have their respective advantages and disadvantages. This guide quickly discusses the contrast of cordless vs corded circular saws in hopes of helping you decide which one suits you better. Let’s cut to the chase then.

A corded circular saw is meant for more work-intensive tasks which often involve larger and thicker materials, such as ripping big pieces of timber and repetitive crosscuts in even wet wood.

Corded circular saws are better for working with larger volumes and longer projects; the additional power helps produce clean and consistent results, while the absence of batteries means that you have longer up-times.

Professionals with home-based workshops can vouch for the convenience and efficiency of their favorite corded circular saw. 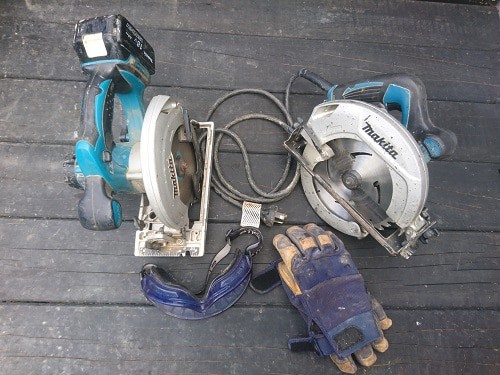 Most cordless models nowadays have near the same capacities as their corded counterparts, making them just as viable if not a little bit more versatile.

The absence of a cord grants you more reach and flexibility at the cost of a little added weight and shorter operation times.

Corded and cordless power tools work very much in the same way. What minute differences they have can often be overlooked and their basic functions are identical.

Below are some of the most apparent differences:

Corded circular saws need an outlet or power supply in order to function. Though they can run significantly longer, the need for a power source greatly limits their reach.

Cordless circular saws on the other hand run on batteries, allowing them to easily run even in completely remote areas. Just don’t expect to get the longest up-times with them when ripping timber.

Since their power sources are different, how their power is measured also differs. The power of a corded circular saw is displayed in amps. This is because the voltage used by all corded models is the same at 120 volts [1] in the US.

Typical corded saws are around 10 – 15 amps. On the other hand, the power of cordless circular saws is usually displayed in volts. Most cordless models sport an 18 – 20V output.

When gauging motor power, the higher the power rating, the stronger the saw. Since corded circular saws run on consistent power, their motors are more robust and capable, able to chuck out RPMs nearing 7000.

Cordless circular saws on the other hand run on batteries and often need to tone power down in order to prolong use times. Surprisingly, innovation has allowed even cordless motors to reach up to 5,200RPM. While they can still be maneuvered fairly easily, the cord sometimes limits reach and flexibility. Cordless circular saws are more balanced – they supplement decent cutting endurance with higher degrees of precision and handling.

A powerful motor means that corded circular saws can use larger blades compared to cordless ones. These blades can have anywhere between 32 – 80 teeth and diameters as big as 7.25 inches [2]. This allows corded circular saws to tackle a wider range of tasks and perform deeper cuts.

Here’s how to replace correct-sized blades.

6. The portability and weight

Corded circular saws are meant to be used as semi-stationary tools. The fact that they rely on a power source means that you can’t just bring them anywhere. What adds to the general weight of a corded circular saw is when you opt for a bigger unit when you need to use larger blades.

Cordless circular saws are more portable since they run on batteries, but are actually heavier in weight to power comparison because the weight of the battery is also factored in. Despite being easier to bring around, some cordless models can reach a little over 12 pounds with fully charged batteries.

But for a portable lower-powered cross-cutting saw a cordless saw is in fact lighter and easier to use.

Regardless of if your using a corded or cordless circular saw, always remember that these are powerful cutting tools and that precaution must always be taken throughout use.

Corded models are more powerful, therefore more hazardous in the event of an accident. The cord can cause you or someone to trip if not properly monitored or even cause a fire should there be an electrical short or overload without an RCD at the power source. Cordless models are safer, but can still cause harm due to the fact that they are still powerful tools with prolonged use and operation with fatigue.

When should you upgrade to a table saw for ripping jobs?

Table saws are more expensive and require ample space to properly use. While circular saws are capable handheld tools, they pale in comparison to the wonders table saws when doing ripping jobs.

Since ripping wood requires cutting huge volumes of wood with more resistance, a table saw greatly helps reduce the load and is still an effective tool even in the hands of a complete beginner.

Over circular saws, table saws are also the better option for precision work, which is important for manufacturing structural wood pieces to a specific dimension. Finally, table saws might be larger, but they are actually easier to maintain.

So as long as you have enough space a table saw is faster, easier, and more accurate for ripping timber vs. cross-cutting. anf if space is bothering you, there are portable table saws that you can fold.

What’s the best saw for a beginner or DIY’er?

Beginners won’t really need powerhouse circular saws if they’re still learning the ropes. As such, it’s recommended for beginners to start with a cordless circular saw since they are generally safer and overall easier to handle.

No cord means less chance of an accident and they actually give you more freedom to move around and work in a position that you’re comfortable with.

They also allow for more practice since they run on batteries and can be more frequently used without set-up and running out a read and setting up an RCD.

For the cheapest option we recommend the Skil 20V 6-½ inch circular saw – it’s affordable and has all the necessary features that beginners should learn. But for anyone serious might as well start with Makita from the beginning.

What’s the best saw for a new builder?

Both actually. When somebody already becomes a fully-fledged builder, chances are that they already have an expansive and versatile skillset. To complement their abilities, builders need an equally capable tool kit or, in this case, a saw that meets the demands.

A corded saw comes is a staple for demanding and repetitive cuts, while a cordless saw allows a builder to effectively work at remote locations away from the sawhorses like on the roof. Both expand a builder’s scope and reach to do a job faster.

As you can see, corded and cordless circular saws are very similar, yet also very different from each other. While they basically do the same thing, certain details pertaining to their use might fit the working style of some better than others.

If you’re just starting out in your DIY journey, then a cordless model is the better choice since it’s easier to handle and it will meet the demands of casual use.

Cordless models are more portable and are better suited for those who are constantly on the go. Otherwise, the savvy professional should have both, especially if each variant will fill a specific role in their toolkit.

At the end of the day, what we can all be sure of is that everybody benefits from a handy power saw and circular saws are surely no exception. You know the saying, “If you love cutting wood, then you must love cutting expenses.” Or is that just us?